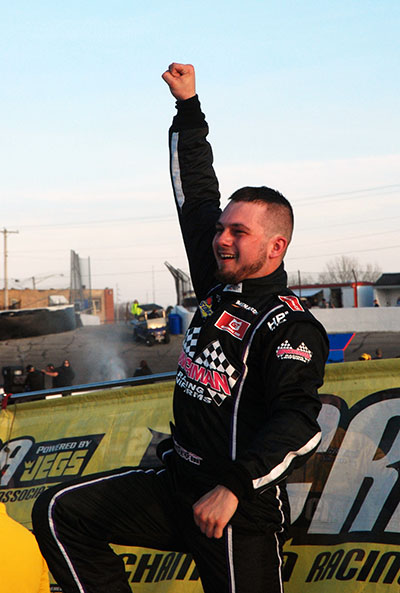 Experience at Anderson Speedway paid off as Jack Dossey III captured his first CRA Super Series win. Dossey, a two-time late model champion at Anderson Speedway, was able to save his tires and had the right car set-up on Saturday to win the Mitch Smith Automotive 125 presented by Perfecto Tool and Engineering. It was the opening race of the 2019 season for the super late model series.

After posting the fourth fastest time during qualifying, Dossey drifted back at the start of the race to the fifth spot in an effort to save his tires. Brett Robinson led 93 of the first 94 laps around the high banked quarter-mile oval, only surrendering the lead once to Travis Braden on the 35th circuit. The race was only slowed twice by caution periods, which included a green flag run of 89 circuits.

By lap 50 Dossey was running third behind Robinson and Braden and moved into the second spot on lap 72 with an inside pass in turn three. Dossey slowly closed the gap on Robinson and on lap 95 executed a bump and run move in turn four to take the lead. The final caution flag waved on lap 100 for a spin by Ryan Issacs. On the restart Braden and defending race winner Josh Brock got inside of Robinson in turn four. But when Braden and Brock started battling for the position it allowed Dossey to pull away to a comfortable lead.

At the finish Dossey won by 3-seconds over Braden followed by Robinson, Scott Tomasik and Brock. “I hope there are a lot more wins,” Dossey said in victory lane after going winless in the JEGS All Star Tours for two years. “I can’t remember when I went two years without a win. I couldn’t pick a better race track to get my first win.”Dossey said he was saving his tires for late in the race and the car was set-up to get a good bite coming off the corners. Robinson acknowledged that even in the practice sessions Dossey’s car was getting better forward bite coming off the corners. Braden said his car lost the rear brakes which caused the front tires to wear faster than anticipated.

In other racing action: Josh Poore opened the season with a victory in the Vore’s Welding and Steel Street Stocks taking the point from Nathan Green on lap 12. He then held off JJ Schafer by a half second for the win with Andrew Teepe coming home third.

Indianapolis driver Dale Harper won for the first time at Anderson Speedway in the 50-lap feature for the PGG Enterprise ThunderCars. Robbie Wyman led the opening circuit but Harper then took control with an outside pass entering turn three and stayed in front to the finish. Dustin Sapp and Jameson Owens rounded out the top three.

Elwood’s Bruce McFall won the Hart’s Auto Figure 8 race by holding off a determined Nick Warner for most of the 25 lap feature.