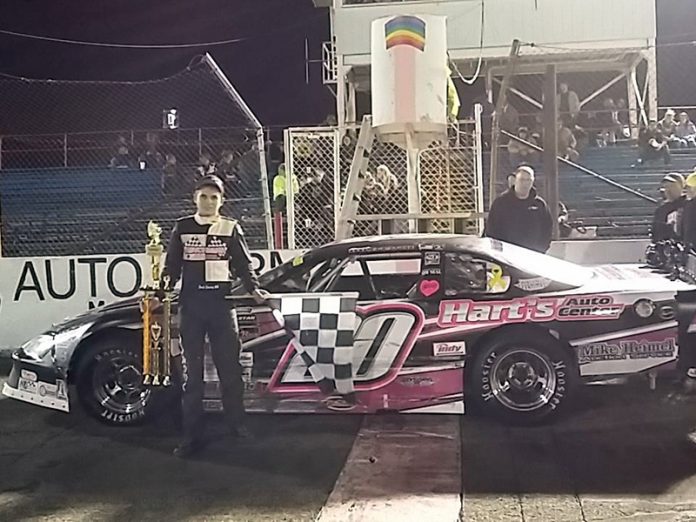 Anderson Speedway waited out late afternoon rain showers to provide fans with excellent racing on the final regular night of action on Saturday.

Following a caution period near the halfway mark of the Street Stock feature, Josh Poore opened a sizeable lead and then had to hold off Calvin Parham.

He finally used a power move coming off the second corner to pass Owens going down the back straight with fast qualifier Parham moving into second in turn three.

The two ran nose to tail until the first caution flag waved on lap 27 when Owens and Andrew Cook tangled in turn four.

On the restart Poore was able to pull away from Parham, who was battling with Brandon Mefford for the second spot.

Poore recorded his seventh consecutive feature win of the year by beating Parham to the checkered flag by 1.8-seconds over Parham with Mefford, Josh Sage and Buck Purtee rounding out the top five.

“It was a lot of work tonight,” Poore said in the AutoFarm McCrocklin Ford winner’s circle. “The car was handling right; it was loose in the corners.

“I was surprised I was able to pull away after the caution, but I think Brandon (Mefford) was raising Calvin (Parham) pretty hard for second,” he said.

During the first half of the race the best battle on the track was for third involving Mefford, Owens, Cook and visiting Ohio driver Sage.

Mefford finally was able to claim the spot on lap 25 with an inside move coming off the third corner.

Jack Dossey III showed a lot of patience for the first 40 laps of the McGunegill Engine Performance Late Model 75-lap feature as he pursued Danny Trent.

With Dossey looking for a way around Trent, Greg VanAlst closed on the leaders with Jeff Marcum running a close fourth.

Trent appeared to have a brief mechanical problem on lap 44 coming off the fourth corner which allowed both Dossey and VanAlst to slip past.

For the final 31 laps VanAlst kept the pressure on Dossey, but came up a half-second short with Marcum, Trent and Josh Timmerman rounding out the top five.

Gary Eaton Jr. ran in the tire tracks of Dylan Hoppes for 54 laps before taking the lead with an inside pass entering turn three to win the Marcum Welding Pro Compact 75-lap feature.

Hoppes started on the pole and maintained the lead through 64 circuits before Eaton, the fast qualifier was able to make the deciding pass for the win.

Hoppes tangled with Ron Masters on lap 66 in turn four losing the second spot and was eventually passed by Terry Eaton Jr. for third. Jared Keller came home in fifth.