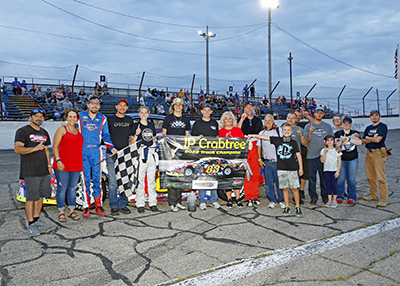 Danny Trent set fast time during qualifying for the McGunegill Engine Performance Late Models for the 40 lap feature on Season Championship Night presented by Byrider on Saturday NIght.Trent led all 40 laps chased for the entire distance by point leader J.P. Crabtree and Jim Crabtree Jr. Trent had to hold off Crabtree on two restarts but at the end was pulling away to win by 1.5-seconds. Charlie Keevan and Kevin Gross rounded out the top five.It was J.P. Crabtree’s first championship at Anderson Speedway.

“It’s been five years since I won a late model race here,” Trent said in the Riley & Sons Victory Lane. “I got an opportunity to run this brand new race car.

“The car got stronger the longer the race went,” he said. “J.P. (Crabtree) was strong on the restarts, but once the tire pressures came up, I could launch off the bottom.” Crabtree who recorded two wins in the past three weeks, said his car was set up better for a short run and Trent’s set-up for the longer runs.

“Finished second, cars in one piece and we won the championship,” he said. “The car gained speed all year.

“Feels really good to be a champion here,” Crabtree continued. “A couple of days ago I was looking at the list of drivers, all the big names that won a championship here.”

The first of two caution periods waved on lap 22 when Buddy Davis stopped on the back straight and on the restart Jeff Whaley II and visiting Missouri driver Terry Limberopoulos tangled in turn two, ending the night for both drivers. Limberopoulos was one of two Missouri drivers making their first appearance at Anderson Speedway. Cole Mizio was credited with a seventh place finish.