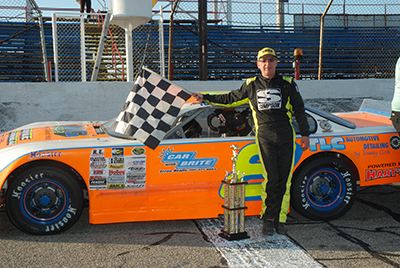 Fort Wayne’s Tommy Cook dominated the Marcum’s Welding 75, but had to hold off a charge from Tanner Jack at the finish. With no fans in the stands for the second week because of the corona-virus pandemic, Anderson Speedway played host to 26 competitors in the Champion Racing Association’s season opener for the Sportsman Late Models.

Cook led the first 16 laps from the outside of the front row chased by Austin Coe. But the caution flag waved three times in the first ten laps with Chad Richardson and Tanner Ballard falling victim to incidents and third place running Ronnie Rose dropping out with a mechanical problem. Coe was able to take the point on lap 17 when Cook got caught behind slower traffic with James Kirby III running third. But following a caution on lap 25 when Jeff Marcum spun, Cook powered around the outside of Coe in turn one to take back the point. Jack moved into the second spot on lap 41, but the driver on the move was Marcum. The former Anderson Speedway track champion started 15th in the pack and after the spin worked his way back to fifth on lap 43. Marcum moved inside of Coe entering turn three on lap 56 and was closing on the two leaders when an apparent engine problem ended a strong run on lap 66. With Cook battling a loose race car in the final stages of the race Jack kept the pressure on, but was never able to get underneath to make the pass.

Coe finished third followed by Tony Dager and Chris Jennings. “I pancaked the right front and after that the car was both loose and tight,” Cook said in the Star Financial Winner’s Circle. Jack said he was hoping to make a run for the win with the laps running down when he scraped the outside retaining wall.

The season opener for the Day Transportation Mel Kenyon Midgets turned out to be a full hand of aces for rookie driver Sam Hinds. In only his fourth start with the series, Hinds captured his first career pole position, first heat victory and first feature win all in one day. Hinds led all 30 laps of the second annual Dick Jordan Classic presented by Last Chance Wrecker and except for at the start was not seriously challenged by second place finisher Colin Grissom of Pendleton.

The two front runners had pulled away from third place finisher Ryan Huggler, Kameron Gladish and Trey Osborne. Hinds said he didn’t know how much of a lead he had over Grissom, who was more than six-seconds back. “I just concentrated on hitting my marks,” he said. “I was nervous coming to the green flag because he (Grissom) is an aggressive driver.”