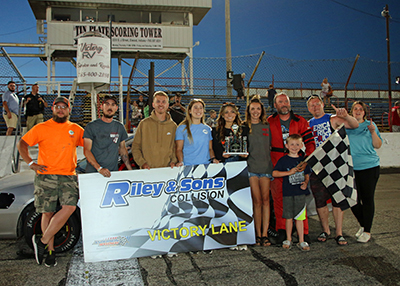 The first caution flag waved on lap ten when James Allender and Terry Sanders tangled coming off the fourth corner. On the restart McKinney had an obvious tire going down and spun on the back straight bringing out the caution flag for the final time. Restarting from the back of the field, McKinney passed Terrill on lap 15 with an inside move entering turn three to move into the third spot and on lap 20 used the outside line to pass McKinnon in turn three. McKinney started to close on Cook in the final stages of the race but drifted high in the waning laps to finish .8-seconds back.

In the Riley & Son Victory Lane, Cook said he was driving the car his daughter normally drives at Mt. Lawn Speedway. “This deal just came together,” Cook said. “I could hear his (McKinney’s) tires squealing in the corners, so I knew he wasn’t that far behind.”