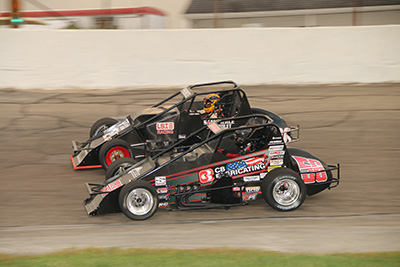 Last Thursday’s 20th Glen Niebel Classic presented by CB Fabricating and Thompson Insurance was postponed due to lightning and rain and has been scheduled to be completed on Thursday night.

61 of the 125 laps of the Glen Niebel Classic have been completed. Bobby Santos III had led the event from the drop of the green and had been challenged heavily by Tyler Roahrig when the race was red flagged. A battle was starting to transpire for the top spot that saw Nick Hamilton, Aaron Pierce, Eric Gordon, and Kody Swanson all within striking distance. When the race was halted due to first lightning and finally rain, track officials decided it was in the best interest of everyone involved to postpone the remainder of the event until this Thursday evening, September 19. The right rear tires were impounded by track officials and will be released back to teams just prior to Thursday’s conclusion of the race.

The K & M Tool and Die Mel Kenyon Midgets and Thunder Roadsters will also be on the racing program.  Pit gates will open at 4:00PM, spectator gates at 5:00 with racing beginning at 7:00pm.  All rain checks will be honored.  Adult spectators without rain checks will be admitted for $5.