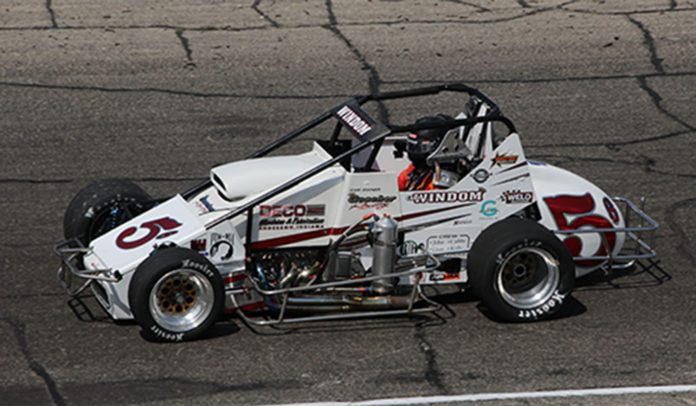 Goacher Racing has announced that the 2-Time Pay Less Little 500 presented by UAW-GM winner Chris Windom will return for the 70th Annual Pay Less Little 500 presented by UAW-GM. He will once again pilot the Anderson, Indiana Goacher Racing 5G. The team will continued to be supported by Elwood, Indiana’s The Tin Plate Fine Food and Spirits Restaurant.

Windom has become one of the top Sprint Car drivers in the country. He won the 2006 UAW Made in America Mel Kenyon Midget Series championship. He also picked up his first Pay Less Little 500 presented by UAW-GM win in 2011 at the age of 20. He once again picked up the win in the 2015 Pay Less Little 500 presented by UAW-GM driving for Goacher Racing. Windom has continued in his winning ways by winning the 2016 USAC Silver Crown Championship and 2017 USAC Sprint Car Championship. Windom has continued his rise by running the NASCAR Truck race at Eldora Speedway. Windom recently announced that he will be driving the Clauson-Marshall/Tony Elliott Foundation entry in this year’s Chili Bowl.

This will be Windom’s fifth start with the team. Recently, his races have not gone as planned. In 2016, Windom lost his wheel coming down the front stretch and in 2017, he had a mechanical failure.

The Tin Plate Fine Food and Spirits Restaurant has been opened since 2015 in Elwood, Indiana. Located next to the old American Sheet and Tin Plate Mill in Elwood, it is a family run business owned by Pat and Patrick Rice. They recently expanded their kitchen and are debuting a new menu in early 2018. They will still offer the “almost famous” tenderloin among other favorites. The Tin Plate is located at 2233 S J St Elwood, Indiana. They are open Monday-Thursday, 11:00am-10:00pm and Friday & Saturday, 11:00am-11:00pm.