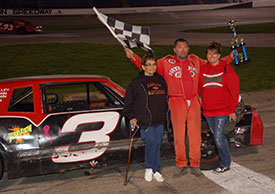 In what could be his last start in a NASH ThunderCar, defending series champion Curtis Chapman went out with a victory.Chapman will be driving an outlaw figure-8 car for the rest of the season and reportedly sold his Thunder Car.Looking to make it two wins in a row, Jeff Marcum jumped into the lead at the start chased by Chapman, fast qualifier Robbie Wyman, Lonny Burton and Austin Russell.The running order remained unchanged for the first eight circuits with the three front-runners in a tight formation when Bruce McFall lost an engine.Chapman used the high line on the restart to pass Marcum for the lead entering turn one and Wyman grabbed the second spot on the front straight on the next circuit.Wyman stayed glued to Chapman’s rear bumper for the next 16 laps, but came up .389-seconds short of the win. Marcum finished third followed by Russell and Burton.Wyman led the entire distance in the fast heat for the division for the win with Marcum, Chapman and Burton completing the running order.In the second heat race, Russell grabbed the lead from the pole position and despite a constant challenge from Chris Snyder went on to the victory.Snyder attempted to use the high groove to maintain momentum coming off the corners to challenge for the lead, but was never able to get along side of Russell.Monte Lewis cracked the top five after three laps with a pass of Nicholas Lewis, but suffered a flat tire two laps later.Following Russell and Snyder to the checkered flag were McFall, Lewis and Jimmy Hawkins.