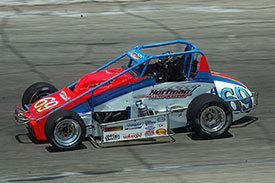 Although two members of the front row have only one combined start for the 66th running of the Pay Less Little 500, they are multi-time winners in open wheel competition. Noblesville’s Bryan Clauson, already promised a ride in the 2015 Indianapolis 500, recorded his first pole position for the Pay Less Little 500 at Anderson Speedway on Thursday with a four-lap average speed of 80.93 miles per hour and the fastest lap of the day at 11.105-seconds around the quarter-mile oval.Aaron Pierce, a two-time pole winner for the Little 500 will start in the middle of the front row with a speed of 80.27 mph and rookie Jerry Coons Jr. will line up on the outside with a speed of 80.25 mph.“I thought the track was good,” Pierce said. “It was starting to get greasy, I’m glad we got out early. The car didn’t come in quick enough. “Pierce said Clauson and Coons are both experienced drivers so the start of the race shouldn’t be a problem.“I’ll try to get myself clear at the start and begin to ride,” he said. Clauson, Coons and several other drivers immediately left Anderson Speedway for the USAC Silver Crown race at the Indiana State Fairgrounds.Four rookies have locked themselves into the starting field for Saturday’s race that starts at 8 p.m.Kyle Hamilton, a former Mel Kenyon Midget champion, was fourth quick. Caleb Armstrong of New Castle will start 14th and Jarett Andretti claimed the 15th and final locked in position for the race.A total of 33 cars took times on Thursday with “bump day” starting at 1:30 p.m. on Friday at Anderson Speedway for drivers hoping to make the starting field.Alexandria’s Donnie Adams Jr. qualified eighth quick with a speed of 79.44 mph in the Kleenco/Salon Professional Academy sponsored car.“I’m happy with it,” Adams said of his qualifying run. “We were in race trim and the car got faster every time we got on the track.”Adams said the track was slick during the practice sessions, but that’s typical for the Little 500.Brian Tyler, a former two-time Little 500 winner, who wrecked his Contos Racing entry during the Tuesday practice session when he lost a left tire, qualified ninth in the Mike Bowman owned car. Jeff Bloom, a three-time Little 500 winner, making his 35th consecutive start, qualified an impressive 17th with a four-lap average speed of 78.8 mph.Brian Gerster, Noblesville, posted the 24th quick time at 77.83 mph and Travis Welpott, the racing school teacher from Pendleton qualified 29th at 77.11 mph.Tickets are available for the historic 66th Pay Less Little 500 at $30 for reserved seating. For more information, contact the Anderson Speedway Ticket Office at (765) 642-0206.