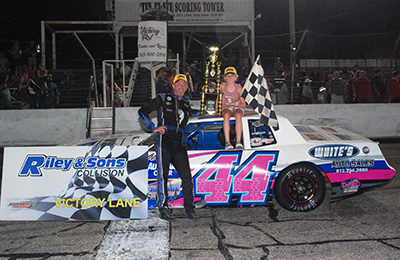 Kentucky driver Chuck Barnes Jr. finally got that anticipated win at Anderson Speedway. Barnes has knocked on the door to victory lane several times in the past when the Champion Racing Association Street Stocks compete on the high-banked quarter mile oval. The win Saturday in the CRA 150 presented by Tom Wood Honda and Sherwin-Williams for Barnes came about when misfortune struck three other drivers with less than 10 laps remaining.

New Castle’s Jason Atkinson took the lead following the half-way break at lap 76 and held off Alan Williams Jr. who led the first 75 laps. With the laps winding down the seventh and final caution flag waved on lap 133 when Cole Baxter blew a right rear tire entering turn one and made contact with the car of J.P. Crabtree. That put Jimmy Kirby, Andrew Teepe, Barnes, Ryan Amonett and Williams all right behind Atkinson to battle for the $3,000 pay day. Teepe grabbed the lead from Atkinson, who’s tires were going away, on lap 140 with Kirby running third and Barnes in the fourth position. On the next circuit Atkinson got inside of Teepe entering turn four and those two and Kirby rode up toward the outside retaining wall, allowing Barnes to drive underneath and into the lead. At the finish Barnes won by 1.97-seconds over Amonett with Dalton Connor coming home in third followed by Atkinson and Williams.

The red flag came out on lap 114 when Anderson’s Dawson Phillips spun in turn three collecting the cars of Chad Pendleton, Josh Poore and Amonett . Only Amonett was able to continue. Barnes used a tire saving strategy for the first 75-laps before starting to work his way to the front after starting tenth in the 30-car field. Amonett said his crew worked really hard on making the repairs after he was caught up in the lap 114 accident. Rookie, Connor started 12th in the field and ran in the top ten for much of the race taking advantage of the melee at the end to earn a podium finish.

Barnes set fast time during qualifying but an invert of ten put Williams and Atkinson on the front row. Williams led the first 75 laps with Atkinson running a in comfortable second with Brett Hudson, Teepe and Kirby holding down the top five positions.