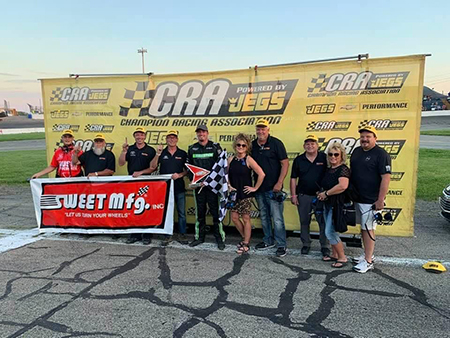 New Castle driver Dalton Armstrong was excited to finally get the “monkey” off his back by dominating the Spring Fling 125. Thanks to a six-car inversion to start the Spring Fling 125 presented by Mitch Smith Automotive and Perfecto at Anderson Speedway for the Champion Racing Association Super Series, Armstrong jumped into the lead with Kyle Crump trying to make the pass on the high side for the first five laps.

After 25 laps Armstrong was pulling away from Hunter Jack, Greg VanAlst, Crump and fast qualifier Scotty Tomasik. The running order remained unchanged for the next 75 laps with Cody Coughlin and Mason Keller retiring after 50 laps. Coughlin retired with an ill-handling race car and Keller dealing with a mechanical issue.

The race’s only caution flag waved on lap 109 when first time competitor Ethan Standiczuk spun in turn two. On the restart with Armstrong continuing to lead VanAlst and Tomasik powered around Jack on the inside. Jack fell back to fifth with Crump making the pass on lap 110. At the checkers it was Armstrong winning by 1.4-seconds over VanAlst with Tomasik rounding out the podium. “It feels good,” Armstrong said in the Riley & Sons Victory Lane. “I didn’t want to see the caution. I knew I had a good car and wanted to have a strong restart.“Once I cleared it was just hitting my marks,” he said. “It feels good to get a win at Anderson. We’ve had some bad luck the past few years.”

Greenfield’s Dalton Conner in only his second start at Anderson Speedway captured the Legends feature. Connor spun early in the race while running fifth and by lap 15 was running third behind Drew Evans and John Robbins. The two leaders crashed on the back straight which ended Robbins night and sent Evans to the tail of the field. From there Connor went on to win by .3-tenths of a second over fast qualifier Xavier King and Kyle Emberton.