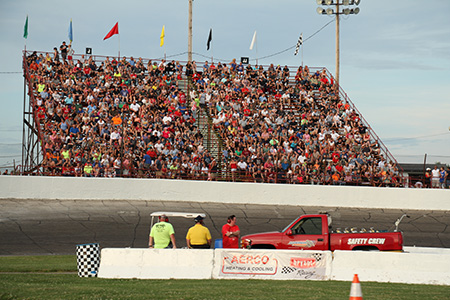 The schedule is once again full of excitement with many special events and touring series in an effort to give the fans a wide variety of entertainment. Highlighting these will be the 71st Annual Pay Less Little 500 presented by UAW-GM on May 25th with the top asphalt Sprint Car racers in the country.

Don’t forget you can save $5 per ticket by purchasing your Pay Less Little 500 presented by UAW-GM Tickets before December 31. You can stop by the main ticket office Monday through Friday from 10a.m. to 4p.m. to pick up your tickets or contact the ticket line at 765-642-0206 ext. 21.

The Redbud 400 will once again be on Monday, July 15. The racing lineup will feature the ARCA/CRA Super Series Late Models competing in a 400-lap event with live pit stop action. Last year saw an exciting race with Canadian Raphael Lessard taking the win.

Other special weekends on tap in 2019 include four non-winged sprint car events, two of which will be Thursday Night Sprint Car Racing.  The 4th Annual Tony Elliott Classic on Saturday, October 5th will take place during Paint the Night Pink. The Classic, honoring great sprint car racer Tony Elliott, will expand to a 250-lap race.

The ARCA/CRA Super Series Late Models will make their first appearance of the season on April 6. The race 125 laps in distance, has been used as a tune up for the Redbud 400.  JEGS/CRA All Stars return to Anderson Speedway on June 29 after a two-year hiatus.

The Night of Thrills on August 31st and Figure 8 Madness on Thursday, July 4th will continue to be some of the most popular and exciting nights at the Speedway. New to the schedule in 2019 is the Inaugural World Championship Trailer Figure 8. It will be an event that you are not going to want to miss.

Anderson Speedway is excited to partner with Shadybowl Speedway and Mt. Lawn Speedway in the Indiana-Ohio ThunderCar Series. Each track will host three races. Eight of the nine races will be 50 laps races. The championship race at Anderson will be 100 laps.

For a limited time, Anderson Speedway is offering special ticket packages that include a 10 pack for $80 and a 20 pack for $150. Stop by the main ticket office Monday through Friday from 10a.m. to 4p.m. to pick up your tickets or contact the ticket line at 765-642-0206 ext. 21 to secure your discounted tickets.