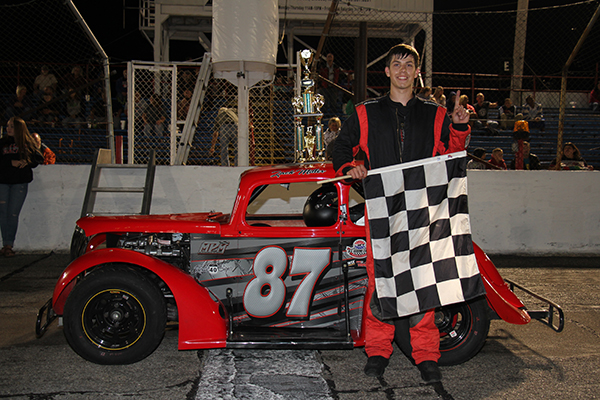 Ohio teenager Zach Miller captured his third consecutive Grant Fritz/Greg Dietzen Memorial race dominating the second half of the event at Anderson Speedway.
The first 25 laps on Saturday featured tight racing amongst four different drivers battling for the top spot with Miller and Taylor Webb swapping the point twice over the final two laps.
Following a break in the action Zach Miller got around Webb on the restart with an outside move coming off the fourth corner after the two traded paint a lap earlier.
Ryan Miller passed Taylor on the next circuit with an outside move down the back straight but was unable to close the gap on his brother. Webb, Caleb Heady and Alan Esdall rounded out the top five.
Zach Miller now ties Tennessee driver Daniel Moyes with three wins in the Fritz/Dietzen Memorial race for Legends cars.
Ryan Miller set fast time during qualifications and would start sixth following the inversion which but Marty Griffith and Heady on the front row.
Heady took the lead at the start chased by Griffith, Ryan Milller, Webb and Edsall. The running order stayed unchanged until the fourth lap when Griffith went high entering turn three and lost three positions.
Webb took the lead from Heady on a restart on the seventh lap with an outside move on the front straight and on the next circuit Zach Miller passed Heady using the high groove exiting turn four.
The caution flag waved on lap 22 when Chad Cory slammed into the turn four wall followed by a caution for the spin of Ashley Tackett.
On the restart Zach Miller took the lead from Webb on the front straight as the two driver raced side by side with Webb leading the first 25 lap segment by taking the point as the checkered flag waved.
Late models
Martinsville driver Josh Cave made his first visit of the year to Anderson Speedway pay off with a flag to flag win in the Anderson Late Model division.
Following the invert from qualifying Cave started on the front row with Dustin Burge taking the lead followed by Joe Woodring and point leader Jeff Marcum.
Marcum slowly started working his way to the front passing Woodring on the eighth circuit and getting inside of Burge for second place with 13 laps remaining.
For the next ten laps Marcum was looking for a way around Cave, who was battling a loose race car coming off the second corner.
On lap 32 Marcum got inside of Cave entering turn three with the two drivers getting loose but able to continue and hold position.
Cave scored his first victory of the year followed by Marcum, Kent Baledge, Woodring and Burge.
Hart’s Figure 8
Anderson’s Shawn Cullen extended his winning streak to five consecutive feature wins in Hart’s Auto Figure 8 competition using lots of patience in the early stages of the race.
Ronnie Phipps took the early lead and was able to hold off Cullen, who was looking for a way to make an inside pass coming off the fourth corner.
Finally on lap 13 Cullen went to the outside line to pass Phipps for the lead and the victory. Joe Beaver, Nick Warner and Michael Phipps rounded out the top five.
Indy Champ Carts
Pendleton’s John Ginder recorded his first career feature win leading at times a seven cart draft around the high-banked oval.
Chris Peters, who has two feature wins in 2017 at Anderson Speedway, stayed tucked behind Ginder’s cart for the first 24 laps. Peters attempted a slingshot move coming off the fourth corner on the final lap but was unable to overtake Ginder.
Karl Schildback, Scott Carson and Todd Pickett rounded out the top five.