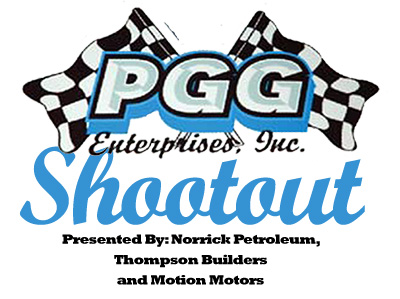 The Vore’s Welding CRA Late Model Sportsman Powered by JEGS and the Anderson Speedway McGunegill Engine Performance Late Models are set to battle it out for bragging rights in the biggest event of the season for both groups, the PGG Shootout 150 this Friday at Anderson Speedway, located in Anderson, Indiana, as part of the prestigious 50th Annual Redbud 300 Weekend Presented by Mitch Smith Auto Service and Perfecto. The event will pay $2,500 to win, the highest winning payoff in the 11 year history of the CRA Late Model Sportsman, down to $225 to start.

The event will be 150 laps counting yellows through lap 125, the last 25 laps will be all green. There will be a break at lap 100 for teams to add fuel and make adjustments. The event is a maximum four tire race, with approved flat tire changes only under yellow. PGG Enterprises will award a shotgun mounted trophy to the event winner. There will also be trophies for the second and third place finishers, plus a clock for the driver who sets Fast Time. Besides PGG Enterprises, other event sponsors include Thompson Builders, Motion Motors and Norrick Petroleum.

Terry Fisher Jr. is in second place in points, he is the only other series winner so far this season, he got a win on April 16th at Anderson and a win on May 6th at Lucas Oil Raceway. Shawn Amor is a close third in points, he finished second to Van Meter last Friday after leading the first 27 laps. Tony Brutti is fourth in points with rookie Brandon Barcus in fifth place.

Jeff Marcum currently leads the Anderson Speedway McGunegill Engine Performance Late Models points after three events so far this season. Marcum has gone to victory lane in the last two division events and finished in second in the other. Brian Morrow is second in points, Joe Woodring is third, Kent Carson is fourth, with Wes Russell Jr. in fifth place. Jack Dossey III won the season opener for the division on March 26.

There will be an open practice on Thursday, July 14th, pit gates open at 4pm, with open practice from 5 to 8pm. Pit gates open on Friday, July 15th at 12pm for a 1:30pm ARCA/CRA Super Series Redbud 300 open practice. Late Model Sportsman cars will have a drivers meeting at 3:45pm, then practice beginning at 4:30pm, with qualifying at 6:15pm. The race program will begin at 7:30pm and will include the PGG Shootout 150 Presented by Thompson Builders, Motion Motors and Norrick Petroleum. Also racing that night will be the Anderson Speedway Street Stocks and the Thunder Roadsters.