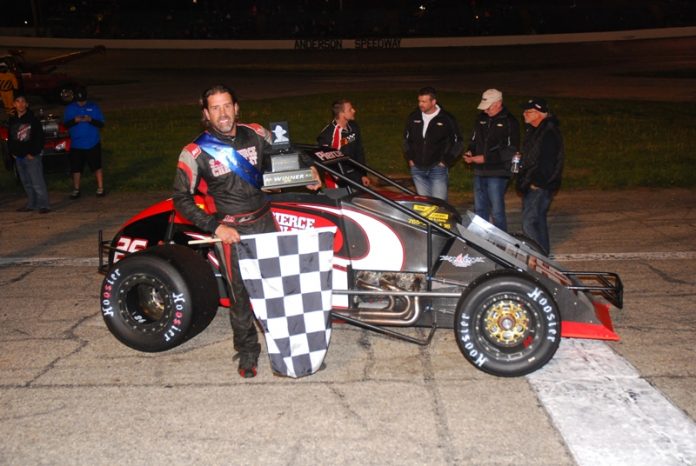 Aaron Pierce continued his domination of the Glenn Niebel Classic for non-wing sprint cars at Anderson Speedway on Saturday.

Pierce has won the 100-lap event honoring the multi-time winning car owner in the Pay Less Little 500 a record five times and in three of the last four events.
Tyler Roahrig started on the pole position after the fastest four qualifiers were inverted, which put Pierce who set fast time on the outside of the second row.
At the start Geoff Kaiser, looking for a second consecutive win at Anderson Speedway, took the lead chased by Pierce, Chris Neuenschwander, Travis Welpott and Roahrig.
The first caution flag waved on lap four when Roahrig appeared to break a suspension part and came to a stop along the back straight wall.
Nine laps later the final caution flag waved on lap 13 when Nick Landon spun in turn four.
With Kaiser on the point Pierce kept the pressure on the leader several times looking to get inside coming off the fourth corner with Neuenschwander a close third.
Finally on lap 54 Kaiser slipped coming off the fourth corner which allowed Pierce to grab the point, a lead he would not surrender.
Neuenschwander moved into the second spot on lap 58 with an inside move coming off the second corner to drop Kaiser to the third spot.
Pierce won by 3.3-seconds followed by Neuenschwander, Kaiser, Welpott and Don Hamilton.
Driving a new car for the first time in competition Ronnie Rose showed he will be a force in the Harts  Figure 8 Division during 2016.
During his qualifying attempt Rose set a new track record of 18.637-seconds that was immediately broken by defending track champion Jeff Swinford with a lap of 18.608-seconds.
Rose took the lead in the feature with an inside pass of Shawn Cullen on an Ivy Tech restart.
The caution flag waved when early leader Curtis Chapman appeared to break a water hose.
With Rose on the point he opened a slight lead over Cullen and Swinford when Jeff Hopkins made contact with the turn three wall on lap 18. It marked the end of Swinford’s night as he pulled into the pit area with an possible overheating problem.
Rose went on to win by less than a second over Cullen with Nick Warner rounding out the top three.
Doug Dugger took the lead from Mark Dietze with an inside move entering the third corner and then kept a comfortable gap to win the Thunder Roadster feature for the first time in more than a year.
Dugger won the first race of the 2015 season and duplicated the feat on Saturday.
John Robbins moved into the second spot on lap six and set his sights on Dugger.
Although Robbins was closing the distance, he still fell 1-second short of the leader, with Osborn finishing third.
Zack Miller inherited the lead in the Legends feature when the two front runners crashed on a restart.
Adam Sturgill took the lead from Ryan Miller on lap six with a power move entering turn one. But on a lap eight restart the two front runners tangled on the front straight, ending their night.
Zack Miller held off Robbins and Marty Griffin for the win.