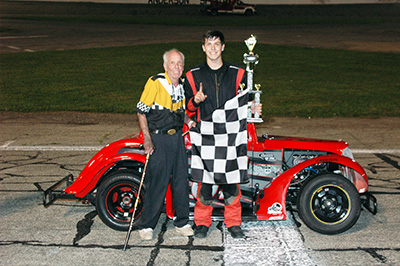 Zach Miller charged from the sixth spot to take the lead with a handful of laps remaining to win his fourth consecutive Grant Fritz/Greg Dietzen Memorial race at Anderson Speedway.
Miller was battling with his brother Ryan, for the lead when slight contact between the two sent Ryan Miller into the turn four retaining wall on lap 39 and Zach Miller to the tail of the lead lap cars.
That gave the lead to Caleb Heady who was in a spirited contest with Frankton’s John Robbins for third through most of the 50-lap feature.
On the restart Zach Miller passed Marty Griffin and Kenny Smith and then passed Conner Popplewell with ten laps remaining with an inside move on the front straight to move into the third spot.
The sixth and final caution flag waved on lap 41 for a spin by Kenny Raney in turn two which was the break Zach Miller needed.
Following the restart Miller passed Robbins for the second spot with an inside pass entering turn one and three laps later he drove inside of Heady on the front straight to take the lead and victory.
Ryan Miller took the lead from Robbins on the second lap with his brother, Zach, claiming the second spot after five circuits.
Ryan continued to lead until lap 27 when Zach took over the top spot with an outside pass in turn three.
Following Zach Miller to the checkered flag was Heady, Robbins, Popplewell and Smith.
In the 75 lap Champion Racing Association Street Stock feature Andrew Teepe was able to take the top spot from Elwood’s Jacob McElfresh with an inside pass on the front straight on lap 26.
Teepe had to hold off McElfresh through three restarts for the victory by less than a second.
While Teepe was holding off McElfresh there was a tight battle for the third spot between Danny Adams, Travis Burge, James Kirby III and Thomas Skiles.
Adams was able to turn back challenges from all comers and with less than five laps remaining had the car of Kirby climb onto his left side body work. Kirby momentarily got airborne, but both drivers were able to continue.
Following Teepe and McElfresh at the finish was Adams, Kirby and Skiles.
Skiles had the most impressive run of the night starting on the tail of the 15-car field after missing his qualifying spot.
In the final appear of 2018 Tom Boorsma won for the second time this year in VROA Modified action taking the lead from Brian Beukema on the eleventh circuit with an outside pass entering turn one on a restart.
Lou Caposey passed Beukema on the front straight with 13 laps remaining to come home second with Gary Storm and Mike Owendag rounding out the top five.
Helped by the inversion following qualifying Chad Cory claimed his second Thunder Roadster feature win of the year to hold onto a slim point lead over runner-up finisher Dave Osborn.
Cory led all 25 laps but was never able to pull more than a car length away from Osborn. Osborn was pressed most of the contest by third place finisher Marty Griffin with Doug Dugger and Gregg Cory rounding out the top five.