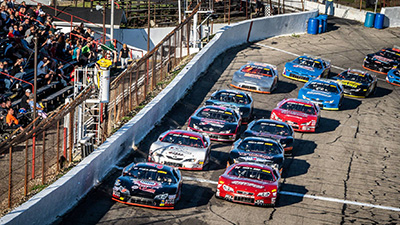 It is RACEDAY for the 55th Annual Greg Hubler Automotive Group Redbud 400 presented by Mitch Smith Auto Service and Perfecto – Watch Live on Speed51.com – Adults $25, Kids (6-12) $10, Ages 5 and under Free – Racing Begins at 7:30pm – We are going to do everything in our power to get the race in today. Any and all updates will be posted promptly on social media and the website.

Three of the current hottest drivers in super late model racing will be competing in the Greg Hubler Automotive Group Redbud 400 presented by Mitch Smith and Perfecto. The Redbud 400 at Anderson Speedway has been recognized as one of the premier short track stock car racing events dating since 1967.

North Carolina driver Corey Heim is entered for tonight’s event coming off an ARCA Menards Series victory at Elko Speedway in Minnesota. Sammy Smith–the winner of the July 4 Freedom 300 at Jennerstown Speedway–has won three of five ARCA East Series races this year. California’s Jesse Love will be competing in a car prepared by Kyle Busch Motorsports. Defending race winner Carson Hocevar–now competing as a rookie in the NASCAR Camping World Truck Series–is back hoping to make it two wins in a row on the high banked quarter-mile oval.

Former race winners Dalton Armstrong and Steve Dorer are entered along with Anderson’s Greg VanAlst who won a 125-lap race at Anderson Speedway earlier this year. Three-time PayLess Little 500 winner Kody Swanson will be seeking to become the only driver to win both the Little 500 and Redbud 400. Texas driver Chet Fillip won the Little 500 in 1999 and the Redbud 400 in 2000. Last year’s pole sitter Casey Johnson from Wisconsin will be looking for a first Redbud 400 win along with Florida driver Stephen Nasse and Cody Coughlin, a multiple time winner at Anderson in Champion Racing Association competition. The last Indiana driver to win the Redbud 400 was Armstrong in 2016. Hoosier competitors entered include Scotty and Chris Tomasik, Mason Keller, Hunter Jack, Jaren and J.P. Crabtree.

The first Redbud race was contested in 1967 and was a 500 lap event sanctioned by ARCA won by Iggy Katona. Over the years the length of the race has changed, but returned to the traditional 400-lap distance several years ago. Included among the race winners in the past are Kyle Busch, Mark Martin, Alan Kulwicki, Dick Trickle, Mike Eddy and Bob Senneker. A practice is set for 1:30 pm with qualifying at 4:30 p.m. and the waving of the green flag at 7:30 p.m. Adult tickets are $25 with children between the age of 6 and 12 admitted for $10 and children under 5 free.