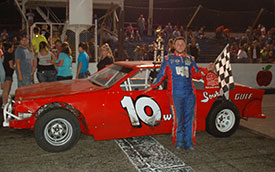 Robbie Wyman made it two consecutive wins in the NASH-FM Thunder Car division taking the lead on lap 15 when leader Lonny Burton spun coming off the fourth corner.Burton led the first 14 laps before spinning while in the lead.Burton grabbed the lead at the start chased by Brian Lewis, Wyman, Nick Warner and Curtis Chapman.The running order remained unchanged until lap five, when Austin Russell spun in turn one and at the same time Chapman got into the back of Wyman’s car coming off turn four. Wyman did a nice job of keeping the car straight, but Chapman was forced to the pits with a leaking radiator.Wyman passed Lewis for the second spot with an inside move entering turn three on lap 10 and then Burton spun, he inherited the lead.Following Wyman to the checkers were Brian Lewis, Nick Warner, Burton and Jimmy Hawkins.“My dad raced here many years,” Wyman said of his dad, Rob. “We’ve made some adjustments to the car.”Wyman set fast time during qualifications for the second time this year followed b Chapman and Lewis.Chapman claimed the heat win when Russell spun in turn one. He held off Wyman by less than two-tenths of a second. Warner, Burton and Lewis rounded out the top five.