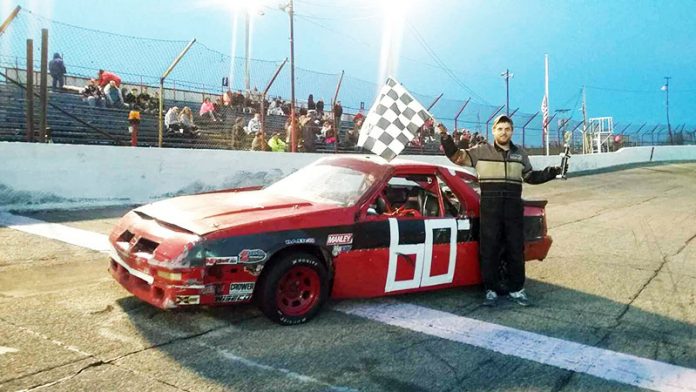 Jeff Williams started his quest for the Marcum Welding Pro Compact Division with the win on opening night.

Helped by an inversion of nine, Ryan Claborn and Terry Neal started on the front row with Neal grabbing the lead at the wave of the green flag.

Claborn, running second, got loose exiting Turn 2 and dropped out of the top five, with Williams and Nick Warner moving up into the top three.

Neal got pushed to the outside line on the 12th lap in Turn 2 and lost the top spot to Williams with Terry Eaton Jr. and Kevin Harmon in close contact.

Disaster struck Harmon, the fast qualifier, a lap later when he made contact with Tim Yarberry in Turn 4 in an incident involving Neal. Only Neal was able to continue.

Warner slipped inside of Eaton on the Ivy Tech restart to move into the second spot and set his sights on the lead.

Williams beat Warner to the checkers by .3 of a second followed by Eaton, Claborn and Brandon Lee Cook.

“I didn’t know the race was 25 laps,” Williams said after the win. “I set up the tire pressures for 20 laps. I was lucky to stay out front.

“I knew Nick (Warner) was there because he bumped me a couple of times,” he said. “I won’t forget the feature is 25 laps.”

Harmon set fast time during qualifications with a lap of 14.806-seconds followed by the 14.989-seconds of Eaton and Matt Tharp’s lap of 15.004-seconds.

Williams led the entire distance to capture the first heat race of the year and swapped the lead several times with Terry Neal through the first heat of the race.

Once Williams claimed the top spot for good Neal had to settle for second place followed by Warner.

The second heat race had only completed a lap when Bill Overshiner and Robbie Rehm made contact in turn one which also involved the car of Elliott McKinney.

Ryan Claborn took the lead on the restart chased to the checkers by Alexander Keller and Ron Phipps.