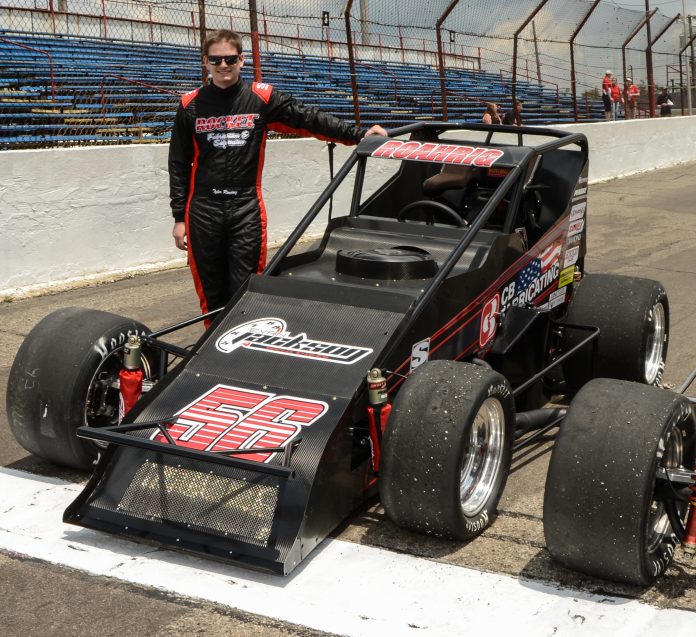 Will “Persistence” result in a Little 500 win for Roahrig?

Anderson, Indiana (February 10, 2020): 2019 saw Tyler Roahrig have a breakthrough season at the quarter mile bullring in Anderson, Indiana. He gave everyone a glimpse of the potential the Plymouth, Indiana team can achieve in 2020. Roahrig will be attempting his fifth Little 500 this coming May.

Just before the 2018 Little 500, people started saying that Tyler Roahrig and longtime engine builder, Evan Jackson, were building a car to compete in the 70th Little 500. The car showed up to the Wednesday practice before the Little 500 and made its maiden voyage. The team was able to qualify 14th and lock themselves into the field that saw over 45 cars attempt to qualify. The team retired after 432 laps and finished in the 15th position. From this point, they have competed in almost every non-wing event at Anderson Speedway.

Before last year’s Little 500, Roahrig came and tested at Anderson Speedway. The team wasn’t making any long runs as most teams do before the Little 500. He was focused on his two and four laps qualification runs for the up coming races at Anderson Speedway. He wanted to improve his qualifying position and give himself better track position. His average starting position in 2019 improved six positions from 2018.  Roahrig has a new set of goals for this coming season.

“I want to improve on my maneuverability in traffic,” explained Tyler Roahrig. “I feel like we have shown that we have the speed to run upfront. I just want to continue to work on my pace in traffic so that we can be in a place to win at the end.”

The speed was shown in the final two races of 2019. Roahrig was able to win at both the Glen Niebel Classic and Tony Elliott Classic at Anderson Speedway. He also put on a dominating performance at the Auto Value Super Sprint Race at Baer Field Motorsports Park.

Roahrig is well known for his prowess running outlaw late models.  He has been no stranger to victory lane over the past couple years. He has picked up wins at tracks across the Midwest including Kalamazoo Speedway, Toldeo Speedway, New Paris Speedway. and Jukasa Motor Speedway.

“I think I have learned a lot of my patience and pacing from running late model races.” Explained Roahrig. “Most late model races that I run are at least 100 laps long, but the other front runners like Bobby (Santos) and Kody (Swanson) have the same experience in Silver Crown Cars.”

In 2020, the team returns with Anderson, Indiana based sponsor CB Fabricating as the primary sponsor. They will continue to receive support from Evan Jackson Racing Engines. The preparation is already taking place for the May 23rd classic, the Little 500.

“The race is tough because it is the first non-wing race of the year,” said Roahrig. “The car has to be mechanically sound and ready to compete in 500 laps. No simulation or practice can prepare you for 500 laps. During the race every driver endures trouble, but you just have to keep your head in the game.”