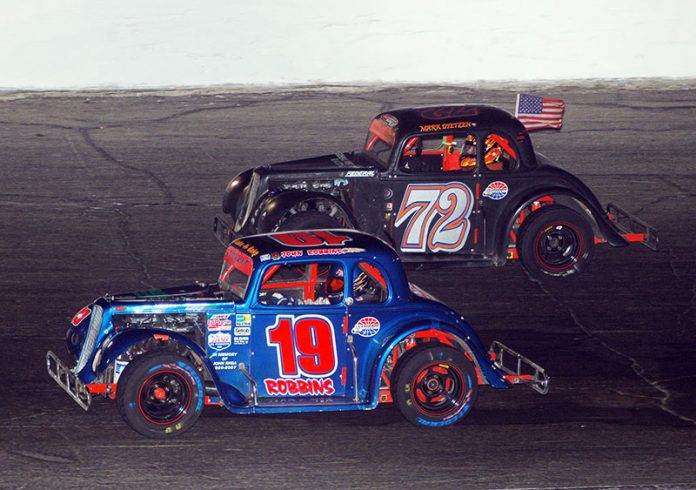 Anderson Speedway returns to racing action on Saturday, August 23 with the Wick’s Pies Retro Weekend that showcases an exciting on track racing lineup along with Vintage Car Show with Classic Car, Motorcycle and Tractor Show.

The 18th Annual Grant Fritz/Greg Dietzen Memorial featuring the Legends along with the McGunegill Engine Performance Late Models in the PGG 100 presented by Thompson Builders headline the on-track action. The Mel Kenyon Midgets and Thunder Roadsters will also be part of the racing lineup.

Ever since 1997 the biggest race of the season for the Legends Division drivers is the Grant Fritz/Greg Dietzen Memorial.

The race started in memory of Grant Fritz, a promising Legends driver, who died two years prior to the inaugural running in a garage accident. His father Larry won the first race.

Greg Dietzen, a Legends competitor, who helped many other drivers over the years, was added to the name of the race in 2005.

The race has traditionally attracted drivers competing for points in the quest for the Legends National Championship.

Indianapolis driver Rodney Smith has two wins, scoring victories in 1998 and again in 2006.

No driver has a better record in the Grant Fritz/Greg Dietzen Memorial then Tennessee driver David Moyes III. He has set quick time six times since 2007 and has recorded five consecutive wins from 2008 through 2012.

Somewhat of a surprise in the history of the race is the fact that Anderson Speedway track champion John Robbins has never pulled into victory lane.

Robbins set fast time in 2013, his first pole position for the race. He finished second to Kevin Donahue. He also finished second in 2009 and has three third place showings from 2010 through 2012.

The Thunder Roadsters will make their eighth season appearance. Feature victories have been claimed by John Robbins (3), Chris Weddel (2) and single event wins by James Edsall lll and Doug Dugger. The point standings is led by Robbins with Marty Griffin and Dugger filling out the top three.

The Kenyon Midgets will make their third appearance of the season at Anderson. In the previous two events feature wins have been claimed by Travis Young and Cole Fehr. In the season standings, Fehr holds a 55 point advantage over rookie Colton Dooley with Jessica Bean in third position. Travis Young and Kent Kriegbaum round out the top five in the standings.

On Saturday, August 23, spectator gates open at 5 p.m. with the racing beginning at 8. Admission is $12 for adults and $4 for kids ages 6-12. Children five and under get in free.