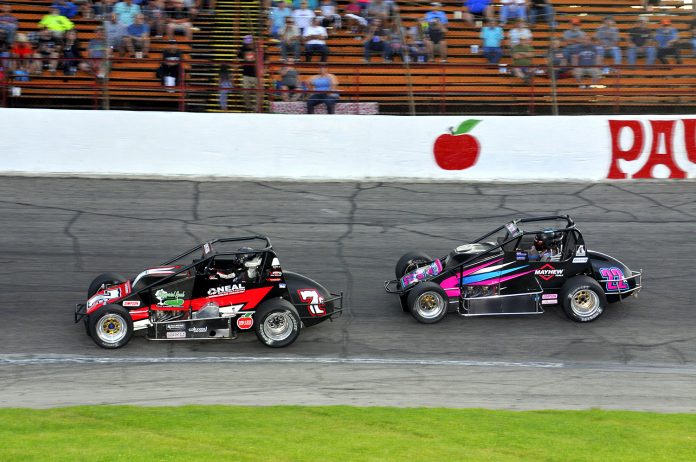 Who will earn the third Tony Elliott Classic Trophy?

ANDERSON – A strong field of 29 drivers will be vying this Saturday at Anderson Speedway to earn the victory in the Third Annual Tony Elliott Classic Trophy for non-wing sprint cars.
Last year Aaron Pierce won the 125-lap feature event with Kody Swanson claiming the win in the inaugural event in 2016.

The Tony Elliott Classic honors the long time Pay Less Little 500 presented by UAW-GM competitor who died unexpectedly in an airplane crash in 2015.

The $3,000 to win race is the marquee event on Paint the Night Pink presented by Sherwin Williams and the WolfeRich Insurance Group.

The starting field will consist of 22 starters. Eighteen will lock in during qualifications with four advancing from a 15-lap B Main.

During the past two seasons at Anderson Speedway Pierce and Swanson have had a virtual lock on entering the Star Financial Victory Lane with a combined six wins in seven events for the non-wing Anderson Sprints.

Pierce won the first non-wing Thursday night sprint car race with Swanson emerging victorious in the other two and the California driver also secured his second Pay Less Little 500 presented by UAW-Gm victory in May.

New Haven, Indiana driver Chris Neuenschwander has been on the verge of recording a victory over the past two years with a couple of second place finishes and was leading the August race when a mechanical problem ended his night. He is teaming up with Jerry Powell Racing for the second consecutive race.

Swanson’s teammate Jerry Coons Jr. had the September race in his sights when he lost the lead to Swanson on the final lap in the Glen Niebel Classic.

The K&M Tool & Die Mel Kenyon Midgets will be making their seventh appearance of the season in the Parallax Power Supply 30.

Dameron Taylor has won five of the first six events this year. The 2018 championship with Trey Osborne claiming the crown. Both are expected to be in action Saturday.

The Marcum Welding Front Wheel Drive drivers will be competing in a 50-lap feature that pays $500 to the winner.