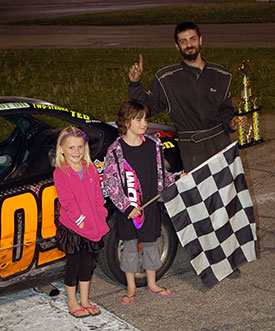 Nick Warner made his third consecutive visit to the Tim Thompson Nationwide Insurance winner’s circle in Figure-8 action for the Front Wheel Drive division.Warner took the lead from Randy Owens with an inside pass entering turn one on the second circuit and was never challenged for the victory.While Warner was pulling away from the field, Owens and Kevin Henson waged a spirited battle for the second position.At the finish it was Henson claiming the runner-up spot followed by Owens, Elliott McKinney and Randy Hoppes.McKinney and Hoppes both gained a position when Jeff Williams retired while running fourth with two laps remaining.In the heat race Williams recorded the victory passing Kamden Creek at the halfway point with an inside moving exiting the second corner.Henson passed Creek two laps later and the chase was on for the win. Both drivers had narrow escapes in the cross-over with the car of Blake Zirkle.While the action was taking place on the point, Warner slowly made his way through the field to finish third followed by Creek and Hoppes.