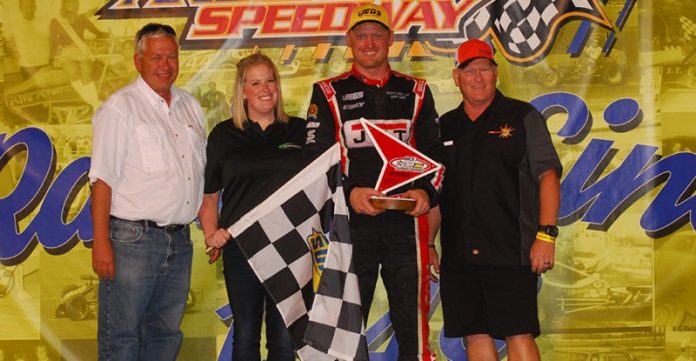 After leading for much of the second half of the Parallax Power Supply Red Bud 400, Steve Wallace made the final pass of the night with two laps remaining to win the first of three CRA Triple Crown events at Anderson Speedway.
The 16th and final caution flag of the night set up a five-lap shootout with Wallace opting to start in the outside line, giving the low line to Raphael Lessard with Steve Dorer and Eddie VanMeter poised for an opportunity to steal the victory.
With the two leaders leaning heavily on each other through the corners, Lessard was able to get inside of Wallace to take the lead on the back straight with three laps remaining. But when Lessard left the low line open Wallace took advantage of the opportunity and raced to the win.
Dorer, Steve Nasse and Jack Dossey III all were able to slip underneath Lessard, who settled for sixth.
With the victory Wallace was able to accomplish a feat at Anderson Speedway that his father, Rusty, and uncles Mike and Kenny, were unable to obtain, a victory at Anderson Speedway in the annual Red Bud event.
New Castle’s Fred Hopkins turned in an impressive effort finishing seventh after starting 21st to garner the Most Improved Award.
There was tight racing throughout the 400-lap event on the high-banked quarter-mile oval to the delight of an appreciative crowd.
The top ten cars ran nose to tail with drivers waiting for someone to make a mistake.
Wallace led the final 137 laps taking the lead from Lessard with an inside pass coming off the third corner just before the caution flag waved for a spin by Kenny Tweedy on lap 263.
The two drivers that battled for the lead through the first 130 laps of the race were both out of contention by lap 180.
Florida driver Jeff Choquette led 160 of the first 180 laps when he made contact with the car of Jack Smith in turn four and bounced off the outside retaining wall. Choquette’s night was finished with an apparent suspension problem.
Pole sitter Johnny VanDoorn led the first nine laps and regained the lead from Choquette on lap 125 before being passed by the Florida driver on a restart. VanDoorn drifted high in turn two on lap 136 and lost numerous positions. He pitted on lap 180 and returned to competition down multiple laps.
Defending race winner Dalton Armstrong experienced transmission problems before qualifying and then was involved in two incidents, including making contact with Terry Cater in turn three. The contact with the outside wall ended his bid for back-to-back wins.
There were 16 caution periods for a total of 125 laps and six lead changes among five different drivers.