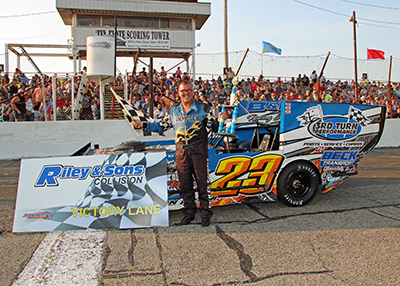 Eddie VanMeter led the final eight laps to score a three-peat in Outlaw Figure-8 action at Anderson Speedway. Anderson driver Mike Riddle Jr. took advantage of the invert after qualifying on Best Way Disposal Figure 8 Madness night on Sunday to grab the early lead. With Riddle out front there was a spirited battle for the next three positions between Jesse Tunny, Ben Tunny and VanMeter with Charles Hargraves lurking in the fifth spot.

By lap 20 of the 50-lap feature Riddle was leading Ben Tunny with VanMeter running third. VanMeter moved into the second spot on lap 23 with an inside pass of Ben Tunny with Jesse Tunny passing Ben Tunny and VanMeter by lap 30. Riddle continued to lead when both VanMeter and Ben Tunny climbed up two spots with ten laps remaining. Everything changed on lap 42 when the caution flag waved for the stalled car of Pete Bear IV in the crossover. On the restart Riddle elected to start on the outside, giving VanMeter the low groove entering turn one. VanMeter took advantage of Riddle’s decision and body slammed his way into the lead. VanMeter went on to win by 4.9 seconds with Riddle hanging on to the second spot over Ben Tunny. Michigan driver Jeremy Vanderhoof passed Jesse Tunny on the final lap to finish in fourth.

After Ricky Tharp and Nick Warner were eliminated for a difference of opinion during a caution period, Elliott McKinney inherited the lead in the Marcum’s Welding Front Wheel Drive Figure-8 race. McKinney surrendered the lead on a lap six restart to Kamden Creek. McKinney returned the favor two laps later with an outside pass on the back straight. Fast qualifier Ricky Craig moved into the second spot on lap nine and for the next six circuits the two leaders raced side by side for the lead. Craig was using the low groove while McKinney ran the high line keeping up the momentum to maintain the lead. At the finish McKinney won by .296-seconds over Craig with Creek coming home third.