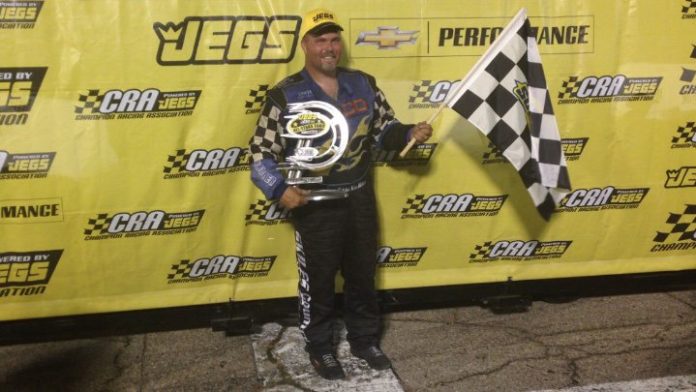 In his first career start with the JEGS All Stars Tour, veteran driver Eddie VanMeter recorded the win in the Anderson 100 at Anderson Speedway on Friday.

VanMeter started from the pole position after the fastest eight cars were inverted for the start and led 88 of the 100 laps, but he was challenged by point leader Dalton Armstrong for the final eight laps.
Fast qualifier Jack Smith challenged VanMeter’s Chevrolet for 47 laps but was never able to challenge for the point.
Smith’s strong run came to an end on lap 93 when Josh Nelms made contact in turn four causing both cars to spin and both drivers had to start at the tail.
A second red flag waved with eight laps remaining when Austin Kunert made contact with the turn four wall while running fourth.
The final restart Armstrong briefly challenged VanMeter for the lead, but was unable to complete the pass.
Armstrong held off Travis Braden for second with Scott Tomasik and Smith rounding out the top five,
Fans were treated to some of the best racing of the season just before the halfway point with VanMeter, Scott Tomasik, Smith, Josh Nelms and Armstrong racing in a tight pack for the top spot.
VanMeter lost the point on a lap 32 restart when he appeared to have spun the rear tires which allowed Tomasik to take the point. VanMeter retook the lead on lap 45 with an inside pass of Tomasik on the back straight.
The red flag waved on lap 11 when Kevin Zielezinski made contact with another car on the back straight and made contact with the turn three wall bouncing off the tire barrier.
The Stoops Freightliner Red Bud 300 for the Champion Racing Associations Super Series will roll off tonight at 7:30 p.m.
Late Model Sportsman
Daleville driver Greg VanAlst returned to the scene of his first ever feature win by winning the Anderson 75 for the CRA Sportsman Late Model race for the second consecutive year.
VanAlst took the lead from Tony Brutti with an inside pass coming off the second corner on the fifth lap and
held off Jason Atkinson by one-second for the win with Matthew Parsons coming home in third.
Atkinson moved into the second spot on lap 29 when he passed Brutti along with Billy VanMeter.
Brutti’s night ended on lap 64 the result of a flat left front tire while he was running fourth.
VanAlst, the defending series champion, came into the night’s action only two points behind Atkinson.
“The Top Choice Fence car was awesome,” VanAlst said in the AutoFarm McCrocklin Ford Winner’s Circle. “We had some problems during practice, but got it figured out for the race. “There’s a lot of racing left,” he said of the championship battle with Atkinson.
Defending Anderson Speedway late model champion Jack Dossey III started fifth and worked his way up to the second spot on lap 17, but two laps later his race ended in a plume of smoke.
The caution flag waved at the start as Ronnie Rose and Dave Duncan, both regulars with the McGunegill Engine Performance Late Models, got together on the front straight. Both cars suffered significant damage.