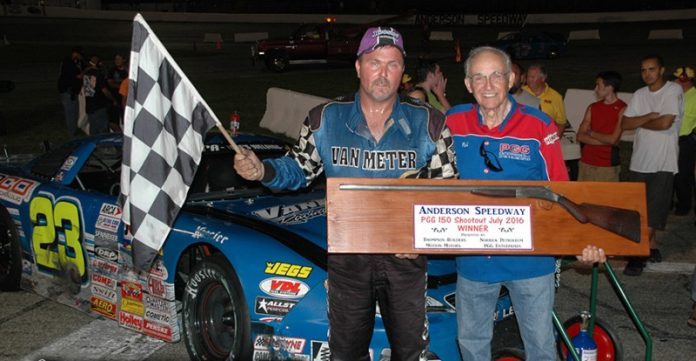 Indianapolis driver Eddie VanMeter started “Late Model Weekend” at Anderson Speedway with a win in the Sportsman Late Model feature.
VanMeter led the final 96 laps of the PPG Shootout on Intersect Night at the Races to win in Champion Racing Association action for the second time at Anderson Speedway.
It was VanMeter’s third consecutive win and padded his point lead over Terry Fisher Jr.
Just prior to the break at lap 100 fast qualifier Greg VanAlst from Daleville made a run for the top spot with ten laps remaining but settled for second with 50 laps remaining.
After VanMeter opened up a lead on the Ivy Tech restart VanAlst closed the gap with 25 laps remaining. But VanAlst was never able to get close enough to challenge for the point.
VanMeter scored the win over VanAlst followed by Fisher, Billy VanMeter and Jon Beach.
“The car was awesome coming off the corners,” VanMeter said. “I didn’t want to run that hard at the break and was trying to save my tires. But I knew Greg (VanAlst) was coming.”
VanAlst said his car was good entering the corner but wouldn’t turn through the middle.
“It was like driving my plow truck,” he said. “I didn’t have anything for Eddie.”
VanMeter took the lead on lap 54 with an outside pass of Fisher on an Ivy Tech restart following the only caution flag of the first 100 laps.
The caution flag waved on lap 46 when Cory Setser spun on the back straight with an apparent fluid leak collecting the car of Steve Woods who made contact with the infield barriers.
VanAlst got inside of Fisher on lap 62 with an inside move entering turn three. From that point the three front runners maintained their position until the break.
The driver on the move through the first 100 laps was Billy VanMeter who started on the tail for the feature after not making a qualifying attempt.
He moved into the top five on lap 44 by passing Setser and then got around Jon Beach for the fourth spot.
There was just the one caution flag and two lead changes among three drivers in the longest race of the season for the CRA Sportsman Late Models.
Street Stocks
Anderson’s Josh Poore chased Mason Keller for 29 laps before making the deciding pass to win the Street Stock feature on Intersect Night at the Races.
Keller took the lead from Jacob McElfresh with an outside pass entering turn one on the third circuit and Poore moved into second on the front straight.
The first change for the lead followed an IvyTech restart after Elwood driver Nick Kronenberg spun in turn two and brought out the red flag for an engine fire.
Following the restart New Castle veteran Jason Atkinson started his climb through the field, moving into the fifth spot on lap six with a pass of Nathan Greene. Atkinson got inside of Jake Owens on lap 11 and McElfresh on lap 19 with an inside pass on the front straight.
But all eyes were up front as lap after lap Poore ran in the tire tracks of Keller, several times trying to get to the inside to make the pass. While the two leaders were jostling for position Jason Atkinson was closing.
Keller got high entering turn three on lap 32 which allowed both Poore and Atkinson to slip past.
Poore, Atkinson and Mason were followed to the finish by McElfresh and Anderson’s Jake Owens.
“He was running his line,” Poore said of trying to pass Keller. “A couple of times I backed off because I didn’t want to win by running through him.”
Poore said he tried to pass Keller on the outside several times but couldn’t get any grip.
Thunder Roadsters
Defending Thunder Roadster champion John Robbins is on a hot streak taking three of the last four feature wins.
The Frankton driver made an inside move on leader Mark Dietzen entering turn three on the eighth circuit and went on to record the victory. Dave Osborn moved into the second spot on the same lap.
The early lead was grabbed by Rodney Oliver but he was passed by Dietzen within the first three laps when Oliver drifted high.
Once out front Robbins pulled away from the remainder of the field to win by 2-seconds over Osborn with Oliver, Dietzen and Marty Griffin rounding out the top five.
Asked in the winner’s circle about adjustments to his car, Robbins said we just keep “freeing” the car up.
“This is the third different race track we’ve competed at recently and at each one it’s just a case of freeing up the car in the corners,” he said.