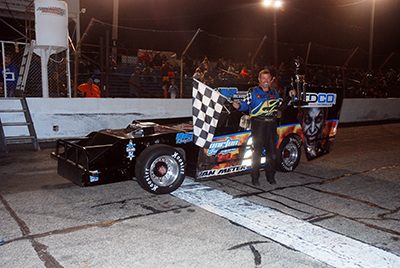 Winning proved to be twice as nice for Indianapolis driver Eddie VanMeter during the Tom Wood Stock Car Festival at Anderson Speedway.

In addition to VanMeter’s double win on Saturday there were five first time winners on Saturday.

By the luck of the draw VanMeter started on the front row for the 40 lap late model feature and immediately jumped into the lead.

From the start VanMeter was pursued by Alexandria driver Kent Baledge, coming off back to back wins in the division chased by Rich Segvich, Tom Miller and Aaron Pierce.

Pierce made the only pass among the top five competitors with a pass of Miller on the back straight on lap six.

But from the first lap Baledge continually closed in on the rear bumper of VanMeter’s Chevrolet and then VanMeter would take advantage of traffic to extend the advantage.

At the finish VanMeter won by less than a second with Segvich rounding out the top three.

VanMeter had not won a late model race on the high banked quarter mile oval in several years and did score a second place finish earlier in the year.

In the Outlaw Figure 8 50-lap feature the early lead was taken by Johnny Hargraves chased by Jesse Tunny and VanMeter.

For the first 10 laps the trio of front runners ran nose to tail with VanMeter and Tunny swapping the second spot several times.

On lap 12 VanMeter claimed the second spot with a pass of Tunny in turn three and a lap later used the outside line coming off the fourth corner to take the lead from Hargraves.

By lap 16 Hargraves surrendered spots to Tunny and Mike Riddle Jr. with Corey Turner claiming the fourth spot on lap 25.

From there attrition started to play a role with Turner and Riddle both pulling out of competition.

VanMeter went on to win by 2.2 seconds over Tunny with Hargraves credited with a third place finish.

Making his first ever start in a Thunder Roadster Danny Trent, a regular in late model action, took advantage of lapped traffic to pass early leader Marty Griffin with 11 laps remaining to record the victory.

Connor Popplewell won his first ever feature in Legends competition by holding off veteran driver John Robbins over the final nine laps.

Popplewell inherited the lead when Alec Webb and Alan Edsall tangled while battling for the lead with nine laps remaining.