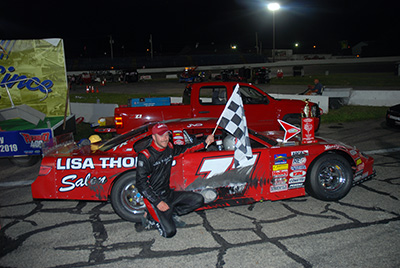 Thrice as nice for Michigan driver Johnny VanDoorn in the Redbud 400. VanDoorn won the classic super late model event at Anderson Speedway on Monday leading 338 of the 400 laps to record his third Redbud 400 victory. He joins legendary short track drivers Bob Senneker and Scott Hansen with three Redbud victories and trails Mark Martin by one.

After taking the lead from pole sitter Daniel Hemric on lap 18 the only time VanDoorn was not out front was three times, twice when he pitted for tires. Jack Dossey III took the lead from VanDoorn on a restart with 26 laps remaining, but on lap 383 VanDoorn retook the point with an inside move in turn three. The final caution flag waved on lap 387 when rookie Jett Noland, running fourth at the time spun in turn one, setting up a seven-lap shoot out. VanDoorn held on to win over Jack Dossey III by six-tenths of a second, followed by Hemric, Cody Coughlin and Josh Brock.

The Redbud 400 was only slowed seven  times for caution periods, twice after the competitors race 75 consecutive laps without a caution period. When the caution flag waved on lap 325 VanDoorn, Dalton Armstrong and Greg VanAlst stayed on the track and when the other drivers stopped for tires it left Armstrong and VanAlst on older tires. Dossey III, rookie Noland, Hemric and Cody Coughlin all gained positions when the caution flag waved on lap 365 for debris.

By lap 250 two of the expected contenders for the victory Travis Braden and Stephen Nasse were done for the night with mechanical problems.

VanDoorn dominated the first half of the race leading 159 of the 200 laps. Pole sitter Daniel Hemric led the first 17 laps when VanDoorn used the inside line to take the lead on a restart following the first caution flag. Hemric continued to run second with Stephen Nasse running third until lap 132 when Jack Dossey III made an inside pass entering turn three.

During qualifications Hemric broke the track record set by Jeff Lane in 2008. Hemric turned a lap at 11.911-seconds (74 miles per hour) which topped Lane’s mark of 11.992-seconds.