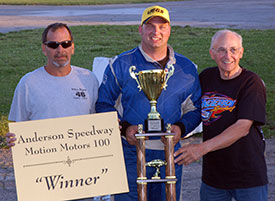 It took 17 years but Greg VanAlst finally got his first career feature win in the Motion Motors 100 at Anderson Speedway on Friday.VanAlst led the entire distance for the McGunegill Engine Performance Late Models and Vores Welding CRA Sportsman drivers and collected the winner’s share of $2,000.VanAlst took advantage of an inversion of ten of the fastest qualifiers to start on the pole. He beat Mark Lambert into turn one and maintained the lead through two restarts.“I needed the first caution to get refocused,” VanAlst said of his strong run.But with 14 laps remaining Quinnteen Bear moved into the second spot with an outside pass of Lambert and started closing on VanAlst. But Bear had to settle for a second place run with Lambert, Jack Dossey III and Kent Baledge rounding out the top five.“I’ve been racing for 17 years and this is my first feature win,” VanAlst said. “This is unbelievable.”Bear, who is looking to make his first CRA Super Series start in the Stoops Freightliner Red Bud 300 tonight at 7:30 p.m., was running fourth with 37 laps remaining.He got inside of Billy VanMeter on the restart on the front straight and then moved inside of Dossey on the front straight.After looking to the inside to pass Lambert, Bear moved to the outside to make the pass entering turn three.Baledge started 16th in the 21 car field and didn’t crack the top five until lap 95 when he got inside of Jeff Marcum exiting turn four.The first caution flag waved on lap 62 in action that started coming off the second corner when Billy VanMeter bumped Chris Hacker knocking him out of the fourth spot.With Hacker stuck on the outside pole sitter Dustin Burge attempted to make an inside pass entering turn three. The two spun and collected the car of Trey Craig. That scrambled the top ten as Hacker, Burge and Craig were running fifth, sixth and seventh at the time.Another green flag lap wasn’t completed when Billy VanMeter and Jack Dossey III got together coming off the second corner while battling for third. That created an accordion effect causing four cars to get together in turn three, including Burge.Hacker lost the point lead to Dossey as a result of his 16th place finish.Burge was making his first career start in a late model for Scott Neal Racing and claimed the pole position with a lap of 12.969-seconds around the quarter-mile high-banked oval.The new sanctioning body the American Motorsports Challenge Series conducted its second race of the year four outlaws which included winged modifieds, late models and a street stock.R.J. Norton III, no stranger to Anderson Speedway led all 100 laps turning back challenges in the first half of the race from Andy DeVreese and Eddie VanMeter.DeVreese’s challenge ended on lap 40 when he spun on the back straight and made contact with the inside wall.Eddie VanMeter started to battle an ill-handling race car on a restart and lost a tire on lap 55. That allowed Norton to pull away to the victory. Norton was followed to the checkers by Ronnie Phipps and Orie Parkhurst.The Stoops Freightliner Redbud 300 is set for Saturday. Pits open at 10 a.m., with a two hour practice for the ARCA/CRA Super Series cars from 1 to 3 p.m. with qualifying for the Redbud 300 beginning at 4:15. There will be an on track autograph session with all the drivers starting at 6, the green flag for the Stoops Freightliner Redbud 300 will drop at 7:30.On Saturday, tickets are $25 for adults, $10 for kids (6-12) and free for five and under.