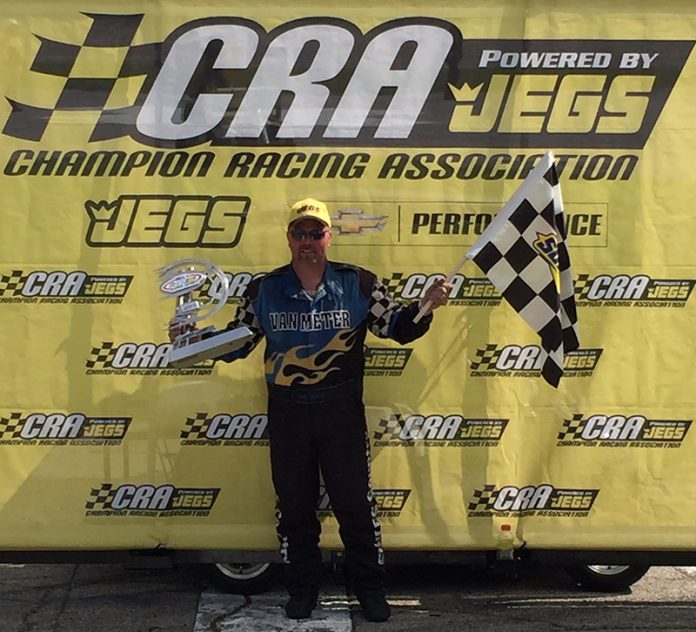 It had been nine years since Eddie Van Meter won a CRA Super Series race but he made the right move with six laps remaining to win at Anderson Speedway on Sunday.

Van Meter took the lead on lap 72 with an outside pass of Grant Quinlan. On four restarts Van Meter opted to start on the outside of the front row in the Madison County Community Health Center 125.

With six laps remaining and Quinlan applying the pressure the caution flag waved when Jack Dossey III tapped the outside retaining wall setting up a run for the checkers.

Van Meter with his tires going away decided to start on the inside of the front row and was able to get a great restart.

Van Meter said his second CRA since 2006 at Angola Speedway was long overdue.

Hunter Baize recovered from being sent to the tail on lap 71 while batting with Greg Van Alst for the lead to finish fourth followed by Paul Shafer Jr.

Van Alst making the Super Series start as part of his 2014 Late Model Sportsman championship, led 69 of the first 71 laps before he was tapped by Hunter Baize in turn two which caused Van Alst to spin. Both driver were sent to the tail of the field. His day ended on lap 89 with a broken rear hub in the Motion Motors Chevrolet.

Adams took the lead from the outside of the front row at the start with Pierce moving into the second spot after starting fourth.

With Pierce running on the back of Adams car, he went to the inside of turn three on lap 22. The two made contact with Adams coming to a stop against the outside retaining wall.

Pierce was chased by Kody Swanson until lap 71 when Swanson slowed giving the second spot to 2014 race winner Caleb Armstrong.

Armstrong was never able to mount a serious challenge on Pierce, unlike last year when he took the lead late in the race.