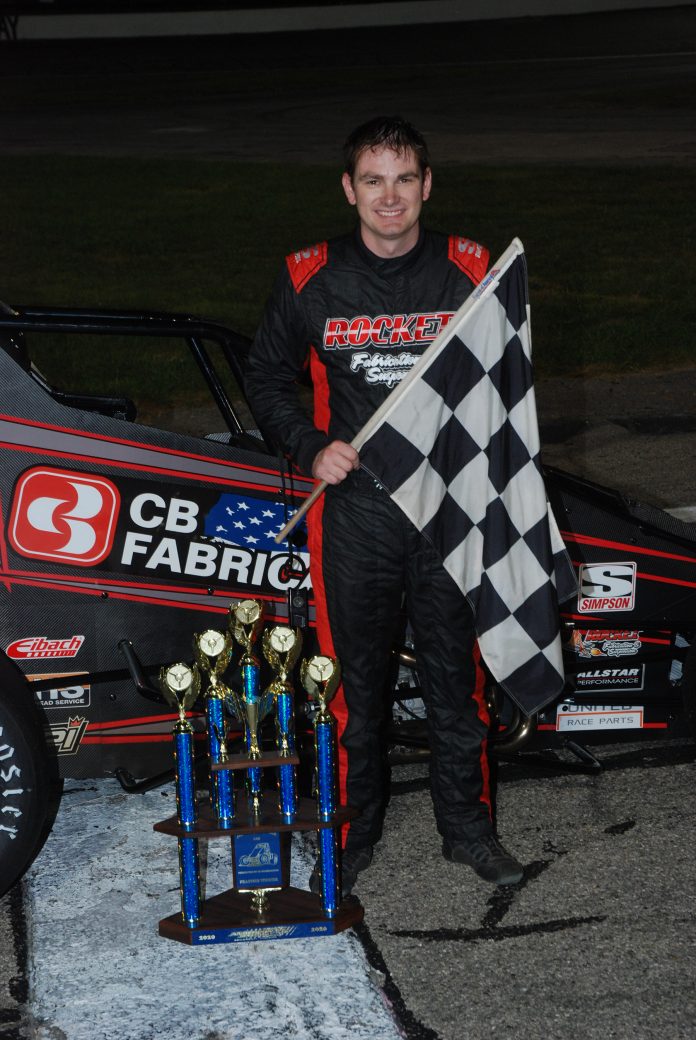 ANDERSON – Tyler Roahrig continued his mastery of non-wing sprint car racing at Anderson Speedway with his four wins in a row.

Aside from the Pay Less Little 500 the Plymouth driver has won four of the last six 125-lap races on the high banked quarter-mile oval.

Roahrig was all smiles after pulling a one for the inversion of the Sprint Car feature on Thursday’s CB Fabricating Night at the Races.

Roahrig led all 125-laps to win by 0.932 seconds over Swanson and Dakoda Armstrong.

Armstrong said his car got better after the 80 lap mark and had problems passing cars early in the race.

Aaron Pierce moved around Dakoda Armstrong on the second circuit and the running order remained unchanged until Nick Hamilton spun on lap 30.

Following the restart Roahrig once again started pulling away from the rest of the field with Santos, Swanson, Pierce and Armstrong racing in close formation.

Swanson got inside of Santos on lap 47 entering turn three and set his sights on Roahrig.

The race was red-flagged on lap 90 when Caleb Armstrong made heavy contact with the turn three wall while running fourth after a suspension part broke.

Roahrig maintained the lead for the final 35 laps with Swanson able to keep him in sight. Dakoda Armstrong climbed from fifth to third after passing Santos on lap 111.

Sam Hinds took the lead from Ben Varner with an inside pass coming off the second corner on lap 21 to record his second win of the year at Anderson Speedway.

A late race caution wiped out a nice lead for Hinds who was able to hold off Varner on the restart with Colin Grissom moving into the second spot.

After finishing in the runner-up position in the last two feature events behind Chad Cory, Jason Powers scored his first win of the year.

Powers passed early leader Phil Jenkins on the third lap and then had to hold off Doug Dugger and Cory the rest of the way to win by .274-seconds.