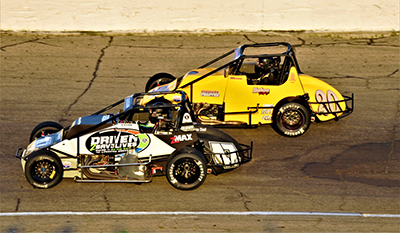 Four traveling series will be in action this weekend at Anderson Speedway with racing on Friday and Saturday.

The highlight of the weekend will be the Inaugural Gene Nolen Classic presented by CB Fabricating and The Tin Plate Fine Food & Spirits for the 500 Sprint Car Tour on Saturday.

A strong field of 26 cars are entered for the 500 Sprint Car Tour presented by Auto Value Bumper to Bumper Part Stores including this season winners Kody Swanson, Tanner Swanson and Kyle O’Gara. Gene’s son Greg Nolen has continued the race team and has entered 14 time Little 500 starter, Shane Hollingsworth in the race.

The Saturday night’s racing program includes the Kenyon Midget Series where Colin Grissom is the most recent winner at Anderson Speedway joining Dameron Taylor and Thomas Schrage. 14 cars are entered as they reach the midpoint in their season.

For the first time the Radical Ford Focus Midgets will be making a visit to Anderson Speedway with feature racing on both Friday and Saturday. Cars from the east and west coasts are descending upon Anderson Speedway for a weekend double header.

The Friday night program includes the 25th running of the Grant Fritz/Greg Dietzen Memorial for Legends cars. Local driver John Robbins will be looking to make it three consecutive wins in the Legends race.

The traveling Baby Grands circuit will be in action on Friday and Saturday where Martinsville driver Danny Trent will be looking for a third consecutive victory.

The Marcum Welding Front Wheel Drive Division is also in action on Friday.

There is a two-day adult ticket available at the Anderson Speedway box office for $20.