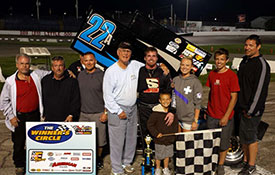 Florida driver Troy DeCaire led all 60 laps to record his ever victory at Anderson Speedway Wednesday in the Must See Racing 60 presented by Sam Pierce Chevrolet.DeCaire started on the outside of the front row as a result of the inversion with Kody Swanson lined up on the pole position.Before a lap was completed Ryan Litt spun on the back straight resulting in a complete restart after DeCaire had jumped into the lead.At the start DeCaire was able to use the high line entering turn one to grab the lead with Swanson right on his tail.Swanson was forced to the pit with a mechanical problem which gave Noblesville driver Brian Gerster, the fast qualifier, a shot at the win.Gerster started sixth and moved into the top five after two laps and up into the third spot following 18 laps.Gerster inherited the second spot when Swanson dropped out but could never make a serious charge for the lead as DeCaire wouldn’t surrender the low line.Jimmy McCune finished third after starting eighth, followed by Jacob Wilson and Aaron Pierce came home fifth after rolling off the in 10th spot.“I was able to get the car down to the bottom at the start,” DeCaire said in the Tim Thompson Nationwide Insurance Winner’s Circle. “I was able to hold my line.”Coatesville driver Cole Fehr used lapped traffic to his advantage to pass Dameron Taylor at the halfway point to record his first career Mel Kenyon Midget victory.Taylor took the lead from the pole position and was chased closely by Fehr, who several times tried to get inside of Taylor.As the two approached lapped traffic Taylor got caught on the low side with Fehr using the high groove in Turn 4.“This is my first win in my second year of racing,” Fehr said. “I’m real excited.”Four laps later Taylor slowed coming off the second corner and pulled to the inside pits.With Fehr opening a comfortable lead, Travis Young, Jessica Bean and rookie driver Logan Huggler staged a spirited battle for second. Young kept looking for the inside line to open up but Young wouldn’t surrender the preferred line.When the checkered flag waved that was the order they finished with Alexandria driver Clayton Gaines coming home fifth after making repairs following a heat race incident.First round qualifications for the 66th Pay Less Little 500 will take place on Thursday, May 22, beginning at 1:30 p.m. with the 33-car field set during second round of qualifications on Friday afternoon. The 66th Pay Less Little 500 goes green approximately at 8 p.m. on Saturday night May 24. Tickets are available for the historic 66th Pay Less Little 500 at $30 for reserved seating. For more information, contact the Anderson Speedway Ticket Office at (765) 642-0206.