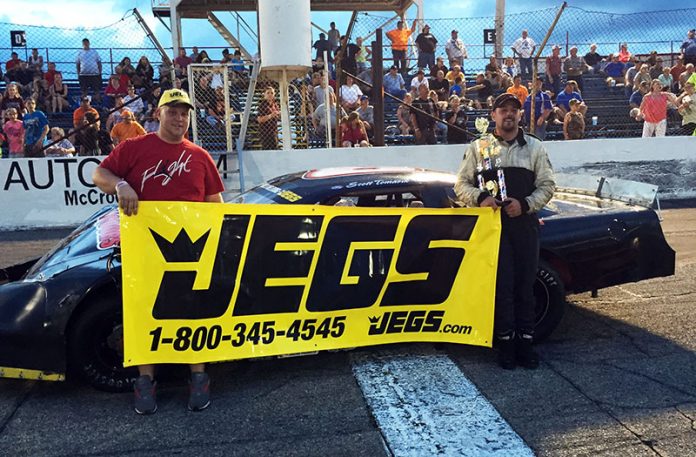 In his second appearance of 2015 at Anderson Speedway, Scotty Tomasik made a return visit to the winner’s circle capturing the 75-lap feature for the CRA Late Model Sportsman on Saturday.

Tomasik set fast time during qualifications and started seventh in the 15-car field. After 20 laps he was running fifth and then went to the high line to pass Tony Brutti for fourth on lap 29 and then drove to the inside to pass Jason Atkinson on lap 34.

The first caution flag waved on lap 38 when Hunter Jack spun in turn four and on the Interstate Auto Auction restart Tomasik used the outside line to pass leader JP Crabtree on the front straight.

Atkinson passed Crabtree on lap 41. During two more restarts Atkinson was unable to wrestle the lead away from Tomasik.

The driver that was on the move was Greg VanAlst, who didn’t post a qualifying time and started last.

VanAlst was running sixth after 45 laps and moved up to the third position with passes of Brutti and Crabtree.

Tomasik took the checked flag just four-tenths of a second ahead of Atkinson and VanAlst. Crabtree finished fourth with Jack Dossey III rounding out the top five.

Local driver Ronnie Rose led the first 23 laps before Crabtree got inside coming off the second corner. Rose’s night ended on lap 32 with a mechanical problem.

“The late caution flags didn’t matter,” Tomasik said in the AutoFarm McCrocklin Ford Winner’s Circle. “This car was on a rail all night.”

VanAlst said he had the car to win on Saturday but didn’t want to damage his equipment. Next week the McGunegill Engine Performance Late Models will be competing in the PGG 100.