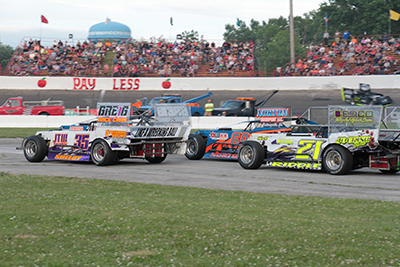 Cold temperatures and the threat of rain forced the rescheduling of the Tom Wood Stock Car Festival to this coming Saturday with the promise of clear skies and seasonal temperatures in store for racing in 12 different divisions.

Recognized as among the “fastest guys on the planet,” the Outlaw Figure 8 traveling series will be the highlight during the Tom Wood Stock Car Festival this weekend at Anderson Speedway.

Jesse Tunny captured the Outlaw Figure 8 race July 4, and a strong field of competitors is expected for 50 laps of action in the crossover.

Alexandria’s Kent Baledge is coming off back-to-back wins to close out the season.

The Marcum Welding Front Wheel Drive division will be in action in addition to a 30-lap feature for Pro Compact cars. The Front Wheel Drive division has produced some of the best racing in recent weeks with the winners not determined until the final laps of competition with Tylar Brown and Don VanVelkenburg scoring their first ever wins on the high banked quarter-mile oval.

The Thunder Cars, Thunder Roadsters and Legends divisions will all be in action.

The night of racing concludes with Figure 8 action for the Front Wheel Drive division and the Hart’s Auto Figure 8 competitors.

Qualifying is set for 2 p.m. Saturday with racing at 4. Adult tickets are $15 with $4 admission for children between the ages of 6 and 12.

Anderson Speedway has one more weekend of racing scheduled with the annual “Turkey Bash” on Nov. 3.