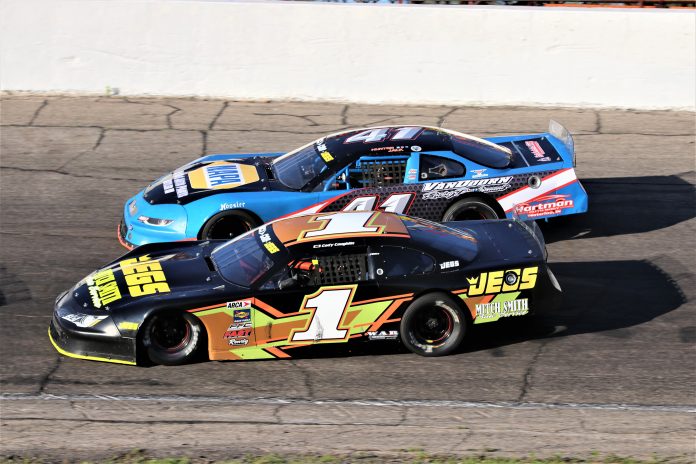 Salem, IN (August 10, 2020) – The ARCA/CRA Super Series Powered by JEGS will return to action this Saturday in the Tom Wood Honda 125 Presented by AERCO Heating & Cooling on the fast quarter mile of Anderson Speedway, located in Anderson, Indiana. This event was added to the ARCA/CRA Super Series 2020 schedule after an event scheduled at Berlin Raceway was canceled because of spectator restrictions with the COVID-19 Pandemic.

Saturday’s series event will be the fifth event of the 24th season of competition for the ARCA/CRA Super Series after early season events were rescheduled or cancelled because of the COVID-19 Pandemic. The series opened its 2020 season at Lebanon I-44 Speedway on May 30th were Carson Hocevar picked up his first ever series win. 2016 series Champion Cody Coughlin picked up the win in the series second event of the season on June 20th at Anderson Speedway. Bubba Pollard picked up the win in the July 4th event at Jennerstown Speedway Complex, that event was co-sanctioned with the CARS Tour.

Hocevar was the most recent series winner on July 13th at Anderson Speedway, in the 54th Annual Redbud 400 Presented by Mitch Smith Auto Service and Perfecto. Hocevar was driving for TK Racing in place of regular driver Johnny Van Doorn for that event.

2009, 2010 and 2012 series Champion and 2019 Redbud 400 winner Johnny Van Doorn is entered in the TK Racing #71 to make his first start of the 2020 season. Van Doorn is currently third on the series all-time wins list with 24, he is five wins behind second place Brian Campbell and seven wins behind all-time series winner Scott Hantz.

Oregon’s Austin Thom is entered to make his second series start of the season. Thom only got to race in 97 laps of the Redbud 400 before a ruptured oil line ended his night.

Wisconsin veteran racer Dennis Prunty is entered to make his 2020 series debut. Prunty has raced with the series eight times in the past with a best finish of fourth in a 125-lap event at Anderson Speedway. Prunty was the winner of the 2015 Slinger Nationals.

There is an open practice on Friday, pits open at 4pm with practice from 5pm to 8pm. Pits open on Saturday at 1pm. The series will have a one-hour practice from 3:30pm to 4:30pm. Rowdy Manufacturing qualifying for the series will begin at 6pm. Racing starts at 7:30 pm and will include the Tom Wood Honda 125 Presented by AERCO Heating & Cooling for the ARCA/CRA Super Series. The Van Hoy Oil CRA Street Stocks will have their 150 lap Triple Crown Championship event as part of the huge night of racing Saturday night at Anderson Speedway. The CSR Super Cups and Anderson FWD Figure 8’s will also be in action. .