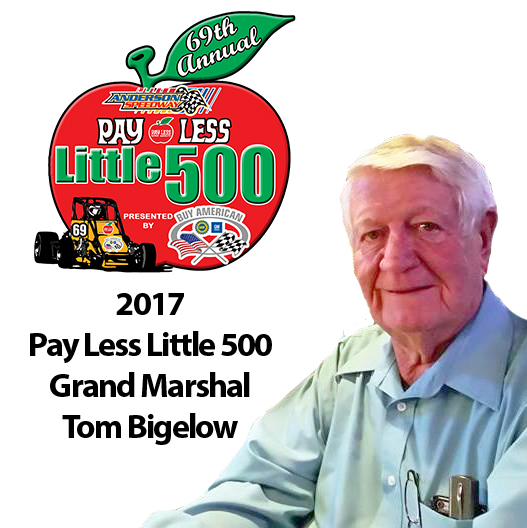 For many years stars from Hollywood would travel to Anderson Speedway to be the grand marshal for the annual Little 500.

Clint Walker, Vince Edwards, Dinah Shore and other Hollywood celebrities would be on hand for the Little 500, but there was never someone involved directly involved in racing.

That will change this coming May.

It was a tradition that ended in the late 1960s but is being revived for the 69th running of the Pay Less Little 500 presented by the UAW-GM with racing legend Tom Bigelow serving as grand marshal.

Rick Dawson, owner of Anderson Speedway, said Bigelow will participate in all the pre-race ceremonies before the May 27 classic race and the autograph session.

“I wanted to honor someone who has meant so much to auto racing in the Midwest and naming Tom as the grand marshal was the best way to do it,” Dawson said.

“This may become a part of future Little 500 races by naming a grand marshal,” he said.

Bigelow started racing jalopies and stock cars in Wisconsin in the 1950’s and made his first start in a sprint car in 1961.

Bigelow, 77, made two starts in the Little 500 but interestingly they were 27 years apart. The Wisconsin native started fourth in the 1965 race and finished seventh and he returned in 1992 starting 13th and finishing 30th.

Bigelow raced 17 years with USAC and CART making nine consecutive starts in the Indianapolis 500 with a career best sixth place finish in 1977.

He made 104 starts with USAC/CART and recorded 39 top ten finishes. Bigelow’s best career finish was a pair of second place showings at the Texas World Speedway and the Milwaukee Mile in 1978.