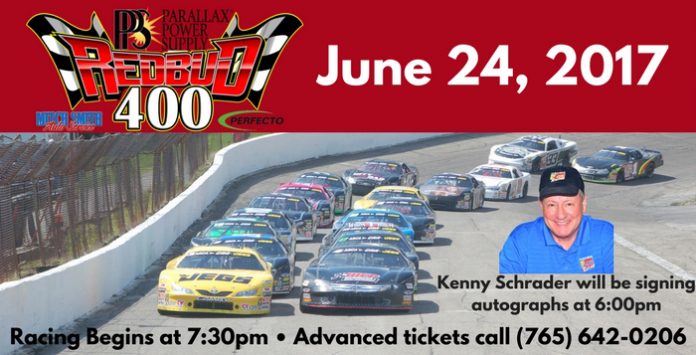 ANDERSON – With a change of format and the addition of 100 laps for the Red Bud 400 teams are trying to determine tire strategy for the race tonight at Anderson Speedway.
Unlike in previous Parallax Power Supply Red Bud 400’s presented by Mitch Smith Auto Service and Perfecto Tool & Engineering there will be no halfway break for teams to make adjustments and change tires. Pit stops will take place during the race with teams given three-laps to make changes to the car set-up and to slap on fresh tires.
“This is an eight tire race,” Scott Neal, crew chief for defending race winner Dalton Armstrong, said Friday during a practice session. “Our plan is to change all four tires after 200 laps and hopefully put some guys a lap down who decided to wait to change tires until after 300 laps.”
Neal said the plan is to set up the car for long runs and to be strong at the end when there may only be four or five cars on the lead lap.
“The additional 100 laps will make a difference,” he said. “It will add some excitement. It will be hard on the equipment.
“After 300 laps the left side tires will be worn out,” Neal said. “At 250 laps you’re starting to lose some grip.”
Veteran driver Eddie VanMeter said his strategy is to hang with the leaders as long as possible before making a tire change.
“We’re going to save the fresh tires for the end,” he said. “After 300 laps we will play it by ear and see what the leaders are doing. I want to stay on the lead lap after 300 laps and then race for the win.”
Veteran Rick Turner is bringing a brand new super late model to the Red Bud 400, only running the car once at Toledo Speedway.
“I like the change in the format,” he said. “Our plan is to change left side tires after 300 laps and save the fresh right side tires for the end.
“The track is not normally hard on tires,” Turner said. “We’ll change two tires at a time. I’ll use the same strategy as last year when we finished fourth.”
Michigan driver Johnny VanDoorn in the Mitch Smith Auto Service Toyota said the goal is to keep the fenders on the car all night.
“This will be a survival race,” he said. “You’re going to need good track position. A lot of guys will pit early in an attempt to stay upfront.
“Probably look at changing tires around the 250 lap mark,” VanDoorn said. “It won’t be the fastest car that will necessarily win, it’s putting yourself in a position to go for the win at the finish.”