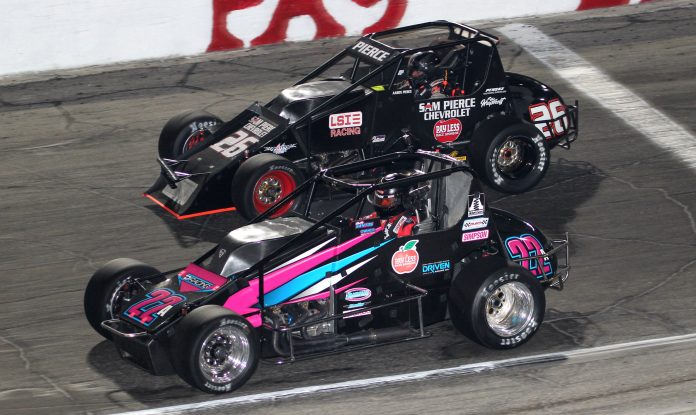 Non-Wing Sprint Cars return to Anderson Speedway just 12 days after running the 72nd Annual Pay Less Little 500 presented by UAW. A Thursday Night Sprint race was not originally scheduled in 2020, but a weather forced postponement of the August Sprint Race left no other options. This will be the sixth Thursday Night Sprint race contested at Anderson Speedway over the past three years.  Three different feature winners have graced victory lane at Anderson Speedway over those years: Aaron Pierce, Kody Swanson, and Tyler Roahrig.

Tyler Roahrig (Plymouth, Indiana) had been the hot shoe coming into the 2020 Little 500. He had won three consecutive 125 lap races at Anderson spanning back to 2019. With a second-place qualifying position and a third-place finish in the Little 500, Roahrig continues to impress. The CB Fabricating backed, and Evan Jackson Racing Engine powered car looks for his fifth Anderson Speedway sprint car victory on Thursday Night.

Kody Swanson, with the Tranter V6 engine, has been dominant at Anderson Speedway. The Kingsburg, California driver has won 7 times since 2016. Five of those seven wins have come in the past three years with Nolen Racing.  However, Swanson is currently on his longest period without a win. His last win at the track came in August of last year. The team has continued to show great speed as he sat on the pole of the Little 500 just two weeks ago.

Aaron Pierce (Yorktown, Indiana) has two Thursday Night Sprint Car wins to his credit. The Anderson Speedway 1 lap and 4 lap track record holder looks for his first win at Anderson Speedway since June of 2019. The team has spent some extra time testing trying to ascend to the top of podium.

Bobby Santos III, with his Little 500 win, can finally say he has gotten the “monkey off of his back.” The Franklin, Massachusetts driver has finished second five times before breaking through at the Little 500. Santos III was leading when rain came during the September 2019 Thursday Night Sprint Race. Santos was not able to return as prior racing commitments forced him to miss the completion of the race. The DJ Racing driver will be looking to continue his winning ways into the only Thursday Night Sprint Race on the 2020 calendar.

Chris Neuenschwander has been a continuous competitor at Anderson Speedway for Sprint Car races. For many years he was driving for the family team, but he has migrated to driving for Jerry Powell. Powell and Neuenschwander have achieved a best of 3rd together. The finish came in last October’s Tony Elliott Classic.

Cousins Caleb and Dakoda Armstrong are both focused on that first-place prize on Thursday Night. Dakoda, sporting a new car in 2020, has worked all season on fixing the “bugs” out of it. The team showed speed and consistency in the Little 500 until a broken hub forced the team to retire.  Caleb has been a mainstay in sprint car racing at Anderson Speedway making 15 starts since 2005. He has been paired with owner Randy Neal and Kevin Besecker as crew chief for all of those starts. The team suffered a broken fuel line that had to be replaced during the Little 500 on lap 204. By replacing the line under caution, the team lost significant laps on the track. Caleb was able to get back on track and finish in 7th position. The team feels like they had one of the best cars on the track and they are expecting to be up front for Thursday Night’s Sprint Race.

9-Time Little 500 winner Eric Gordon has teamed up with Doren Enterprises for the Thursday Night Sprint Race. The Fortville, Indiana competitor has now completed in over 10,000 laps in the Little 500. He is the first driver to achieve that in the 72-year history of the race. Gordon and team overcame a frustrating week with a 5th place finish in the Little 500; 17th Top 5 in his career.

2020 Little 500 rookies Cory Setser (Fort Wayne, Indiana) and Christian Koehler (South Bend, Indiana) are both expected to be back at Anderson Speedway on Thursday Night. Koehler will pilot his own machine for the race.  Rob Keesling (Alexandria, Indiana) and Doug Fitzwater (Anderson, Indaina) both missed the 2020 Little 500 field. However, they are both entered and relative newcomers to sprint car racing.

Capacity for the September 17 Thursday Night Sprint Race presented by CB Fabricating is still at 50%. Tickets will be sold at the admission gate only. Adult Tickets are $15, Kids (6-12) $5, and Ages 5 and under are Free. Pit Gates Open at 3:00pm, Practice/Front Gates Open 4:30pm, Qualifying 6:00pm, Racing is to begin at 7:00pm. Day Transportation Mel Kenyon Midgets and Thunder Roadsters are scheduled to race with the non-wing sprint cars. Watch Live on FloRacing.