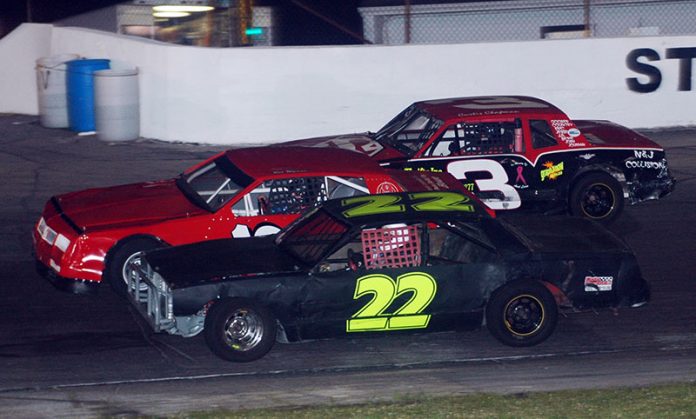 The popular ThunderCar Division returns to Anderson Speedway this weekend as part of the Intersect Championships presented by the Indy Fuel.
The ThunderCars will be making the first of three appearances at the high banked quarter-mile oval for 2015.
Championships will be decided in the Harts Auto Figure-8, Marcums Welding Pro Compacts and Thunder Roadsters.
All four divisions will be competing in heat races and 30 lap features.
Jeff Swinford has been dominant in Harts Auto Figure-8 competition winning seven of the eight features and enters the weekend with a comfortable margin over Nick Warner.
Although Matt Tharp has not scored a feature win in the Marcums Welding Pro Compact Division he has used a season of consistent finishes to build up a substantial point lead.
John Robbins enters the weekend with a sizeable point lead over Doug Dugger and Dave Osborn in the Thunder Roadsters Division. Osborn has visited the AutoFarm  McCrocklin Ford Winner’s Circle in two of the last three feature events.
The Madison County Storm Water Quality Partnership is presenting bike races at the speedway starting at 7:15 p.m. Competitors in the bike races are required to wear a helmet.
Qualifying takes place at 6:30 p.m. with racing action starting at 8 p.m.