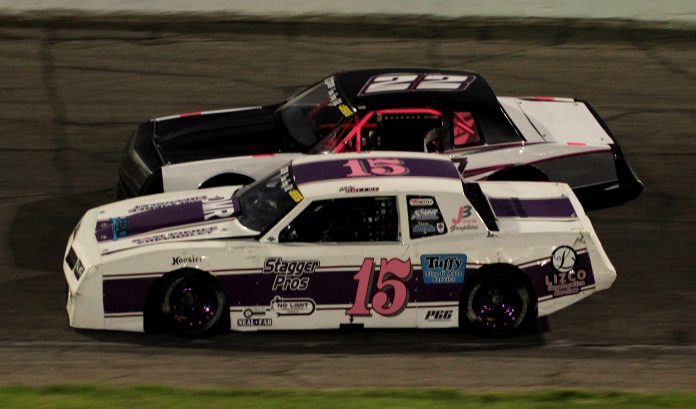 Salem, IN (August 11, 2021) – The Van Hoy Oil CRA Street Stocks Powered by JEGS will be back in action this Saturday in the Vore’s Welding & Steel 150 at Anderson Speedway, located in Anderson, IN. Saturday’s event will be the third of four series events at Anderson Speedway during the 2021 season.

The CRA Street Stock Four Crown mini-series began in 2014 as a three-race mini-series and has taken many iterations in its history. Jason Atkinson has won the Four Crown title four times, with those championships coming in 2015, 2016, 2019 and 2020. Chuck Barnes Jr. and Jacob McElfresh have also claimed titles.

In addition to the $3000 minimum to win for each event, there will be a Points Champion from the four events who will receive a $1000 bonus. Second in points will receive a $600 bonus, third place a $400 bonus, then there will be two $250 bonuses from a random draw from the cars that attended all four events. Each of the Four Crown Series events will be 4 tire races, all four will have a halfway break to add fuel and make adjustments. Each Four Crown event winner and the overall Champion will receive a specially designed buckle from Crumrine Buckle Manufacturing.

With his five wins and a second in the series six-point events this season, Atkinson comes into Saturday night’s event as the series season points leader. Andrew Teepe is in second place, he is 59 points behind Atkinson. Jordan Hahn is in third place, he is 83 points behind Teepe. Leading series rookie Dawson Phillips is in fourth place, he is 57 points behind Hahn. Rookie Kimmie Grieg is in fifth place, she is only one point behind Phillips in a tough battle for the series 2021 Rookie of the Year Award. All the top five in season points are entered for Saturday night’s race. Saturday’s event is the series’ last event before it’s 2021 Chase for the Championship begins at the scheduled Labor Day Weekend event at Winchester Speedway.

There will be an optional open practice at Anderson Speedway this Friday, pits open at 3:30pm, with open practice from 4:30 to 7:30pm. On Saturday, pit gates open at 1:30pm. Practice will begin at 4pm with qualifying beginning at 6pm. The race program is set to begin at 7:30pm and will include the Vore’s Welding & Steel 150 for the Van Hoy Oil CRA Street Stocks. Also racing that night will be the Vore’s Welding CRA Late Model Sportsman in the Tom Wood Honda 100 event, the Victory Custom Trailers CRA Junior Late Models and the Midwest Champ Karts.

More information on all the CRA series is available at www.cra-racing.com.