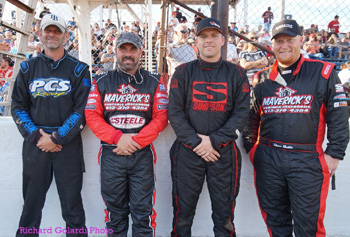 When any event happens over 70 times, traditions around the event begin to take place. One of those traditions has been taking place for almost 40 years at the Little 500. The tradition is the migration north of Florida drivers to compete in the Little 500. The 2020 Pay Less Little 500 presented by UAW is no exception for five Florida teams. Four teams have officially entered the race with one other team planning on attending the race. The four drivers currently entered are Shane Butler, John Inman, Mickey Kempgens and Tommy Nichols. The other driver expected is Johnny Gilbertson.

These five drivers will compete for the Frank Riddle Memorial Award. The award will be given to the highest finishing Florida driver competing in the 72nd Annual Pay Less Little 500 presented by UAW. Kempgens has won the award for the past three years.

Shane Butler of Bushnell, Florida will attempt to qualify for his 10th Little 500. The “Bushnell Bullet” continues the family tradition of competing in the Little 500. His father, Stan Butler made 26 starts in the Little 500, third most all time. Stan’s best finish of 2nd came in 1988 to Bob Frey. Shane’s brother Keith made 10 starts in the storied race. Shane will try to improve on his best finish of 6th that came in 2016.

“We are bringing back the same car we used in 2019,” explained Shane Butler. “We have a new Claxton engine for this year’s race. It is an engine we bought specifically for the Little 500. I am happy we will have our same crew as years past, or as we like to call our dysfunctional family”

John Inman is the least experienced Florida driver attempting to make the Little 500. The Dover, Florida driver was the 2017 Southern Sprint Car Shootout Series Champion, a series that runs predominantly a winged 360 class in Florida. Inman has made two previous starts in the Little 500 with his best finish being 21st. He broke a hub during a pit stop and was forced to retire from the 2019 Little 500. Inman returned for the Tony Elliott Classic last October at Anderson Speedway. In just his third time at the track he was able to finish in the sixth position.

Mickey Kempgens will return with the PCS Racing team. PCS Racing has been competing in the Little 500 together since 2015. The team has had an impressive steak of dependability. In the five races together, they have completed all but 30 of the laps. His highest finish of 4th came in 2018. The PCS team over the winter sold their Hurricane Chassis to Tommy Nichols. After the sell, they had a new Hurricane Chassis built for the 2020 Little 500.

“I am looking forward to working with the same group of guys,” explained Mickey Kempgens. “The team always brings a good consistent racecar and performs incredible pit stops. It is up to me to stay out of trouble and stay up with the competition.”

Tommy Nichols has taken a 25-year hiatus since his last Little 500 start in 1996. The Tampa, Florida driver is returning with the car that Mickey Kempgens has driven at Anderson Speedway the past several years. Nichols was entered into the 2017 Little 500 as a two-car team with Garett Green. Nichols suffered engine issues before the race and was unable to compete. The Florida native has made three previous starts in 1991, 1994, and 1996.

Johnny Gilbertson will look to make his third consecutive Pay Less Little 500 presented by UAW. Gilbertson’s best finish of 18th came in 2019. Gilbertson made the long trek from Florida to compete in the Glen Niebel Classic in July. Unfortunately, he retired after 17 laps.

Tickets for the 72nd Annual Pay Less Little 500 presented by UAW are still available. All seats are reserved and $40 per ticket. To purchase tickets call (765) 642-0206. More information on the week of events and the race can be found at www.andersonspeedway.com. You can watch CB Fabricating Pole Day and the race live on FloRacing.