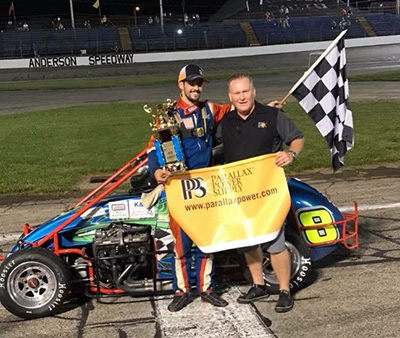 Markleville’s Trent Gossar remained the hottest driver with the Vores Compact Touring Series recording the victory at Anderson Speedway on Saturday.
Gossar has recorded two victories and a second place finish in the last three races as he chases the first championship of his career.
He took advantage of the only caution period during the 30-lap feature to pass Justin Brown with an outside move with eight laps remaining.
The early lead was taken by David Gilliland who started on the pole position after fast qualifier Mark Mason drew an inversion of the fastest nine drivers for the main event.
Gilliland was chased by Terry Eaton Jr., Gossar, Brown and Steve Vore. Brown looking for his third consecutive win at Anderson Speedway took the lead from Gilliland on the sixth circuit and before the lap was completed Gossar and Eaton slipped past to gain the second and third spots.
For the next 16 laps Gossar stayed glued to the rear bumper of Brown’s car when the caution flag waved for a spin by Tommy Dilg in the fourth corner.
On the restart Gossar made the outside line work to get around Brown and he went on to win by 1.3-seconds. Bo Hoelscher, Tom Gossar and Vore rounded out the top five.
Brown said he dreaded a caution flag waving, explaining his car lost grip in the corners following the restarts.
Indianapolis driver Dameron Taylor made it a clean sweep of the K&M Tool & Die Kenyon Midget events at Anderson Speedway this past week.
Taylor won the feature race on Thursday and came back to record his ninth career win on the high banked oval.
Trey Osborne took the early lead chased by Taylor, Nathan Foster and fast qualifier Kameron Gladish.
As happened on Thursday night, Osborne and Taylor made contact in turn four on the seventh circuit with Taylor emerging with the lead.
The caution flag waved on lap 15 when Osborne spun on the back straight and would wave twice more before the end of the race.
Gladish kept the pressure on Taylor for the final 15 laps and through three restarts but had to settle for second place coming up .7-seconds short. Foster finished third followed by Logan Huggler and Colin Grissom.
Anderson’s Ronnie Rose recorded his fourth feature win of the year in Thunder Car action taking the lead from Jerry Swinford Jr. on the fifth circuit.
Rose held off Earl Adams Jr. on a restart to pull away for the win. Adams finished second followed by Tyler DeHart, Kyle Allmond and Dylan Hoppes.