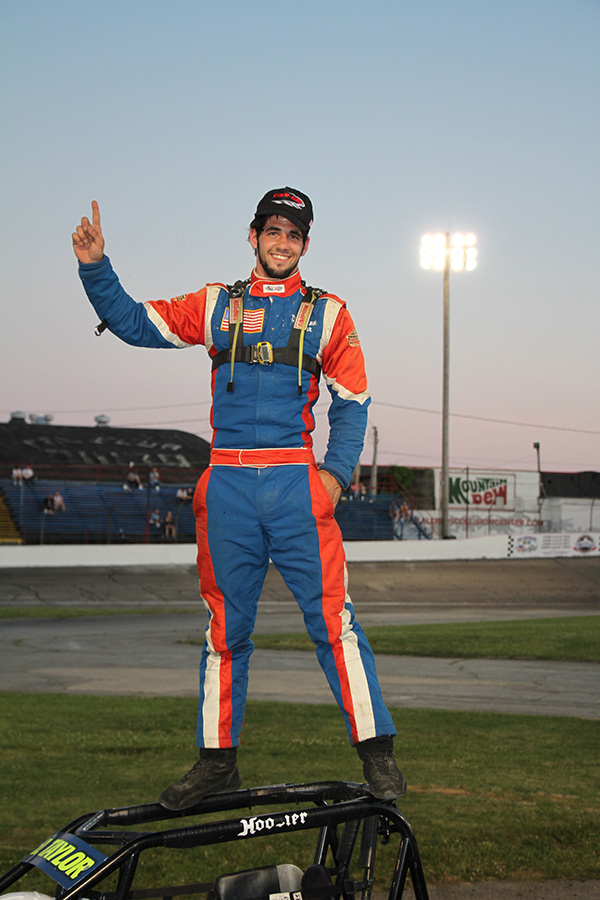 Indianapolis driver Dameron Taylor captured his third win in four races during Mel Kenyon Midget Series action in dominating fashion at Anderson Speedway.
In a break from the normal Kenyon Midget Series events on the high-banked quarter-mile oval Taylor pulled away from the field to win the Parallax Power Supply 30.
Helped by a two-car inversion Taylor started on the outside of the front row with Logan Huggler on the pole but the yellow flag waved before a lap could be completed when three cars tangled on the front straight.
The incident started in the middle of the pack when Anderson’s Colin Grissom and Nate Foster made contact, sending Grissom into the outside retaining wall and collecting Kent Kreigbaum. Only Kreigbaum was able to continue in competition.
At the start it was Logan Huggler taking the point but it only took Taylor a lap to move into the lead with an outside pass coming off the second corner.
With Taylor out front there were five drivers running in a tight pack for the second spot including Logan Huggler, Alexandria’s Clayton Gaines, Tommy Kouns, Trey Osborne and Ryan Huggler. A scramble coming off turn four on the fourth circuit sent Kouns to the second spot followed by Osborne with Logan Huggler dropping to fifth.
That shunt allowed Taylor to open a comfortable lead. Osborne, the fast qualifier, passed Kouns on lap nine with an inside pass entering turn one and on lap 27 Ryan Huggler passed Gaines for the fourth spot.
Following Taylor to the checkers were Osborne, Kouns, Ryan Huggler and Gaines.
The win marked Taylor’s 12th with the series and allowed him to extend the point lead over Ryan Huggler as he seeks back-to-back championships.
Vores Compact Touring Series
Justin Brown drove in the tire tracks of early race leader Steve Vore for 15 laps before finally making the pass for the lead with three laps remaining.
Vore took the lead at the start with Sean Fredricks and Terry Eaton Jr. running in close pursuit with Brown in the fourth spot.
By lap 15 Brown was in the second spot behind Brown and the two sliced their way through traffic with Eaton a close third.
On lap 27 Vore got loose and went low on the back straight allowing Brown to make the pass for his second consecutive victory.
Eaton came home in second with fast qualifier Bo Hoelscher finishing third after Vore’s car was disqualified in post-race technical inspection.
Hoelscher opted at the beginning of the race to take the Applebee’s Late Night Challenge starting on the tail of the field. A win would have been worth $900.
Thunder Cars
Making his first start in a Thunder Car in several years Anderson’s Ronnie Rose set fast time and then captured the feature win.
Jeremy Threet took the early lead but was passed by both Shawn Evans and Rose on the third lap on the front straight.
The caution flag waved on lap ten when Ronnie Phipps car lost an engine which allowed Rose to get the lead with an outside pass of Evans coming off the second corner.
Rose was followed at the finish by Brandon Burkhart, Threet, Brad Cain and Charlie Thomas.