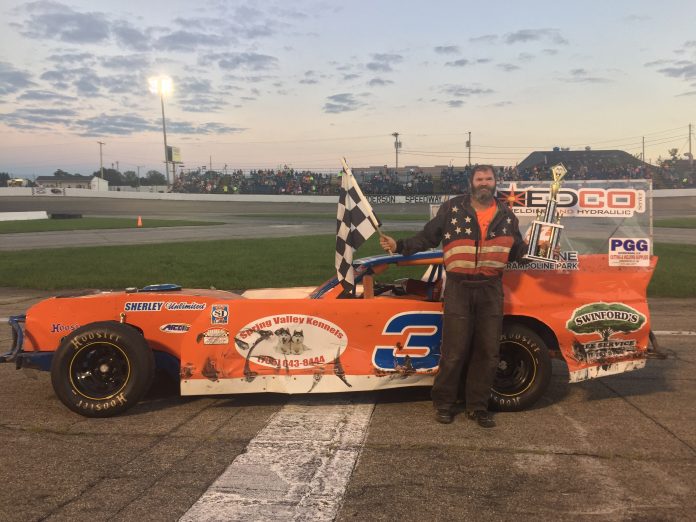 Jeff Swinford scored his fourth win of the season in Hart’s Auto Figure-8 action Saturday at Anderson Speedway after a crash in the crossover eliminated three of his competitors.
Legendary Figure-8 driver Gene Huston made his first appearance at Anderson Speedway since 2002 on the Night of Thrills presented by Hoosier Park Racing & Casino.
Huston, 76, a six-time winner of the National Crown and one the Figure-8 championship in 1999, completed only two laps in his return to action.
Known during the prime of his career for not stopping or slowing down in the crossover, Huston didn’t alter his driving style in his return.
Ron Phipps took the early lead chased by Josh Tharp with Swinford and Shawn Cullen moving into the top five on the second lap.
On the third circuit Huston entered the crossover slamming into the car of Cullen and collecting the car of Camden Creek, bringing out the red flag. All three cares were finished for the night.
Swinford grabbed the lead from Phipps on the Ivy Tech restart and pulled away from the field.
Curtis Chapman was forced to the pits in the lap three accident, with cosmetic damage to his car worked his way back towards the front passing Phipps on lap 16 with an outside move on the back straight to claim the second spot.
Ron Phipps finished third followed by Mike Phipps and Nick Warner.
Phipps did record his second win of the season in Marcum Welding Pro Compacts action leading the entire distance with fast qualifier Jeff Williams glued to his rear bumper for most of the race.
Lap after lap Williams kept the pressure on Phipps as the two race through the corners where the old adage that “rubbing is racing” applied.
That battle came to an end when Williams suffered a flat tire on lap 21 which allowed Warner to claim second followed by Kyle Allmond.
During the Night of Thrills action Timmy Perkins survived organized mayhem in the trailer race to top 14 other competitors for the victory followed by Jim Warner.
Jedi Cluxton used a slow but steady strategy to win the Mattress Race when the four other competitors all speed away at the start and quickly shed their mattresses in the first three laps.
Nick Warner held off Phipps to win the “corkscrew race” aided when Phipps tangled with slowed cars at the corkscrew.
Chris Farley captured the roll over contest followed by Brian Palmer and Mike Acree.