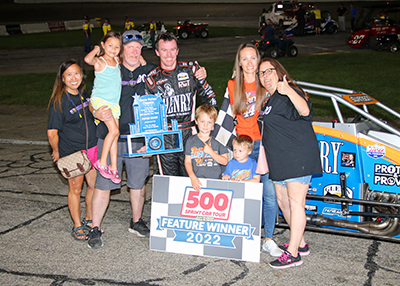 In 2018 Kody Swanson gave long time car owner Gene Nolen a first victory in the Little 500 at Anderson Speedway. During the Inaugural Gene Nolen Classic Saturday, Swanson turned in a dominating performance to win for the second time this year with the 500 Sprint Car Tour presented by Auto Value and Bumper to Bumper Auto Part Stores.

Swanson captured quick time with 22 of the 25 teams on hand within a second of the quick time. With an invert of four it was Brian Gerster leading the opening lap chased by Jacob McElfresh, Swanson and Shane Hollingsworth. McElfresh took the lead on the ninth circuit with an inside pass of Gerster in turn three. But six laps later both Swanson and Hollingsworth passed McElfresh and the two drivers would hold down the top two positions for most of the remainder of the race.

The 100-lap race was slowed only twice once for a spin by Derek Bischak on lap 26 and again on lap 41 when Tanner Swanson made contact with the turn three wall. In the second half of the race the drivers on the move were Dakoda Armstrong and Taylor Ferns. Armstrong passed Davey Hamilton Jr. for the fourth position on lap 55, McElfresh on lap 66 and finally Hollingsworth on lap 94 to claim the runner-up spot. Ferns climbed from seventh to finish fourth over the final 50 laps.

Swanson won over Armstrong by 3.2-seconds with Hollingsworth, Ferns and Bobby Santos III rounding out the top five. “It was such an honor to drive for Gene (Nolen),” Swanson said in the Riley & Sons Victory Lane. “He loved the Little 500 and Anderson Speedway. “I wanted to have a good run tonight,” he said. “I just didn’t want to make any mistakes coming through traffic.”

After years of waiting for a win at Anderson Speedway, Ohio driver Jack Macenko accomplished the feat in the Kenyon Midget feature. Macenko the current Kenyon Midget point leader won for the third time this season during the Gene Nolen Classic night presented by the Tin Plate Fine Food and Spirits and CB Fabricating.

Kyle Ford set fast time during qualifications for the first time in his career capturing the K&K Marketing Fast Qualifier Award, but with an inversion of four it put Clayton Gaines and Dameron Taylor on the front row. Gaines took the early lead with Macenko moving into the second spot on the opening lap. The red flag waved when Jason Fuller got loose in turn two hitting the outside retaining wall and flipping. Fuller was unhurt. On the restart Macenko grabbed the top spot with an inside pass of Gaines entering turn three and just two laps later Taylor made a similar move. Macenko opened a comfortable lead until the second red flag of the race came out when Taylor made contact with a slower car and flipped in turn four. Taylor was uninjured. That put Thomas Schrage on the front row to challenge Macenko for the victory.

Macenko pulled away to win by 1.8-seconds over Schrage with Ford, Gaines and Ryan Huggler rounding out the top five. “I definitely didn’t want to see the red flag,” Macenko said in the Riley & Sons Victory Lane. “I was in a good rhythm when the red flag came out. I’m glad Dameron (Taylor) is okay.” Macenko said he has been close to winning at Anderson in the past.“It’s about time,” he said. “I’ve been close so many times. I wasn’t letting this one slip away. I got a great launch on the final restart.”