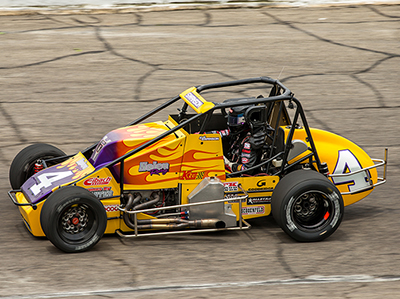 Defending Pay Less Little 500 champion Kody Swanson will lead the field to the green flag from the pole position. Swanson was one of the first cars to make a qualifying attempt on Tin Plate Pole Day and set the mark to beat with four laps in 45.005-seconds (79.99 miles per hour).

Swanson immediately left Anderson Speedway to compete in the final Hoosier Hundred at the Indiana State Fairgrounds in a USAC Silver Crown race. It was Swanson’s first career pole for the Little 500. He has won two of the last three races. Swanson served notice on the competition that he was looking to win his second consecutive Pay Less Little 500 presented by the UAW.

While Swanson was driving back and forth, two-time Little 500 race winner Chris Windom had a more hectic day. Windom qualified tenth for the Indy Lights race at Indianapolis Motor Speedway on Friday and took a helicopter to Anderson Speedway to qualify the car for the Anderson based Goacher Racing team. Veteran driver Jerry Coons Jr. practiced and helped set up the car for Windom, who qualified fourth for the Little 500. He was then headed to the Indiana State Fairgrounds.

Kyle Hamilton, who won the 2017 Little 500 and then missed last year’s race with a number of mechanical issues. He qualified for the middle of the front row. Hamilton said his car was consistent throughout the practice and qualifying session.

Tyler Roahrig will start on the outside of the front row. Rounding out the first two rows are Chris Neuenschwander and two-time Little 500 winner Jacob Wilson.

There was an interesting twist as the time limit approached for qualifying. Shane Hollingsworth withdrew his earlier time and with just minutes remaining jumped into a back-up Gene Nolen owned car. Hollingsworth qualified 17th.

A surprise was that Aaron Pierce qualified 21st on Thursday and Bobby Santos posted the 24th fast time but was disqualified for not reporting to technical inspection. Both drivers normally qualify in the first three rows.