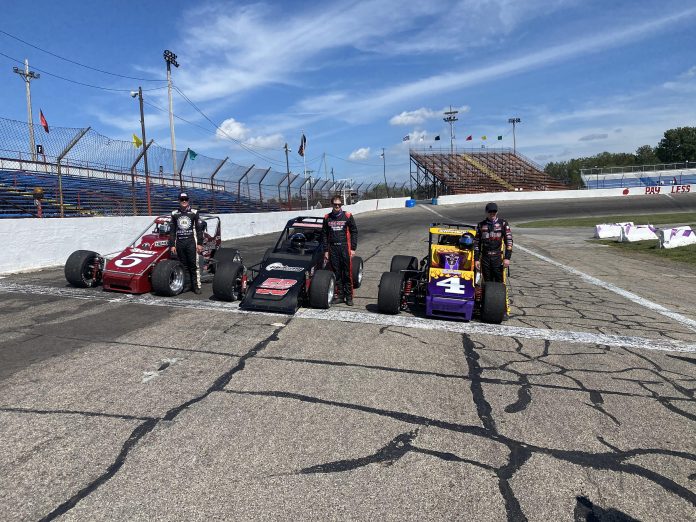 ANDERSON – For the second consecutive year the same three drivers will be leading the field at the start of the 72nd running of the Pay Less Little 500.

Swanson will be seeking his third Little 500 victory and fourth in the past five years.

Just as the front row was comprised of in 2019, Tyler Roahrig and Kyle Hamilton will start outside of Swanson. The only difference being Hamilton earned the second starting spot in 2019.

A total of 34 cars made qualifying runs on Thursday with an additional four cars expected to attempt to bump their way into the 33-car starting field Friday starting at 1:30 p.m.

Swanson made his qualifying run in the middle of the two-hour session.

“We were just trying to get ready,” he said. “We had a really good car at the end of practice. We focused on our car to make it the best we could.”

Swanson said the qualifying times before his run were what he expected.

He actually brushed the outside retaining wall on the front straight during his qualifying attempt.

“Tyler (Roahrig) went out just ahead of us,” Swanson said. “So I knew what the bar was set at.”

Starting on the front row is not a huge advantage because it’s a 500-lap race, he said.

“You’re not in the thick of things and you’re racing against guys you know,” Swanson said. “Just try to avoid anything unexpected.”

“I think going out a little later helped because there was more grip,” he said. “The track got faster throughout the day.”

Roahrig said a front row start is a bid advantage because it’s not necessary to run as hard at the start.

Hamilton was one of the first cars to qualify and said the team wanted to go out early.

“It was a chance to turn in some good laps,” he said. “It’s still a 500-lap race. Being up front helps because you’re racing against guys you know.”

Dakoda Armstrong, Brian Gerster and Chris Neuenschwander will start from the second row.

Angola’s Derek Bischak was the fastest of eight rookies and will start 11th.