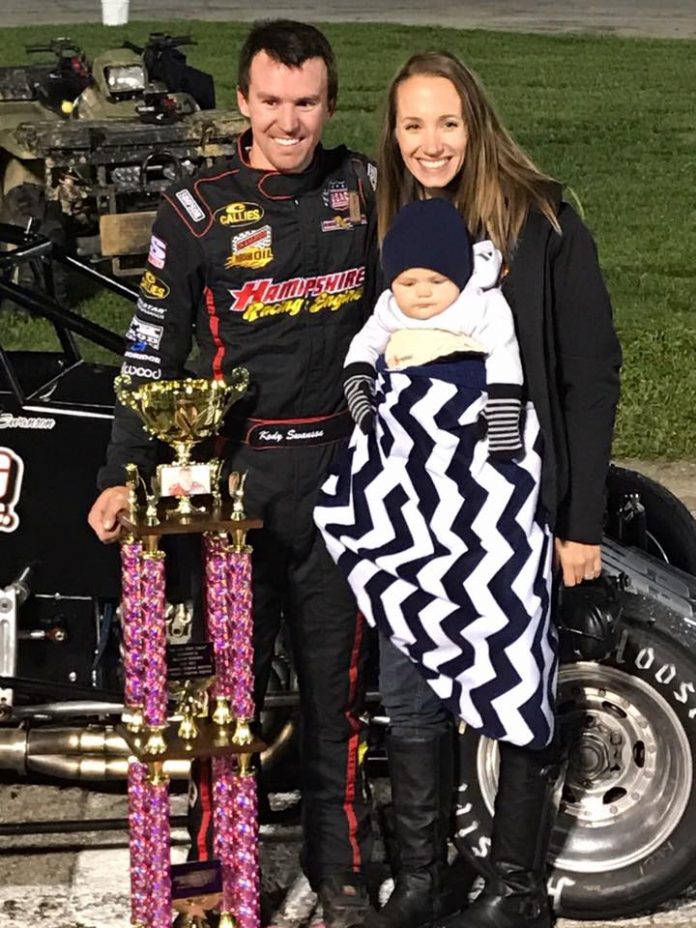 It was an emotional Kody Swanson In the winner’s circle at Anderson Speedway after winning the inaugural Tony Elliott Classic for non-wing sprint cars.

Swanson, the Pay Less Little 500 winner in May, taking the lead in the Brad Armstrong prepared car on the 13th circuit Saturday and driving to the victory.

Elliott was a former two-time national USAC Sprint Car champion who died in an airplane crash in October, 2015.

Aided by a four invert following qualifications Swanson started outside Scotty Hampton with fast qualifier Shane Hollingsworth starting on the outside of the second row.

Hampton took the lead at the start chased by Swanson, who surrendered the second spot on lap 4 to Chris Neuenschwander with Hollingsworth and Travis Welpott rounding out the top five.

Swanson moved into the second spot with an inside pass of Neuenschwander on the back straight and a lap later used an outside move around Hampton on the front straight.

From there Swanson started to pull away while Hollingsworth battled to get around Hampton until there were less than 15 laps remaining.

Hollingsworth was closing on Swanson when the checkered flag wave, losing by .7-tenths of a second. Neuenschwander, Hampton and Welpott rounded out the top five.

Rookie of the year Chase Jones won for the sixth time this season and first time at Anderson Speedway in Kenyon Midget action.

Jones led the first five laps before he was passed by series champion Dameron Taylor with an inside move coming off the second corner.

But four laps later with Taylor battling a loose race car Jones took the lead for good with an inside move on the front straight,

Taylor was passed by fast qualifier Ryan Huggler on lap 13 with a move entering turn three.

Jones went on to win by 2.2-seconds over Huggler with Taylor holding on for third followed by Trey Osborne and Clayton Gaines.

Illinois teenager Dallas Frueh took the lead from Zachary Tinkle on the sixth circuit and then held off fast qualifier Jamie Domski to capture the CSR Super Cups title for the second time in three years.

Manny Aguilar recorded his first ever win in Indy Fast Carts leading the entire distance but beat Jason Reynolds to the checkered flag by 5-hundreds of a second.

Reynolds got a big push on the final lap from fast qualifier Sonny Williams, a lap down following a spin, to advance from fourth to the second spot at the finish.